By Jacky Ankeles on April 7, 2019 0 Comments
Evelina and Manny Cunha
Keep us connected

At first glance, it may seem a little strange for me to be contributing articles to a Portuguese magazine since I am not Portuguese, nor is anyone in my or my husband’s family of Portuguese descent. I am actually 100% of Russian descent, second generation born in America. But with a little help from decades of being involved in the Portuguese community here in Peabody MA, and perhaps simply by a little social ‘osmosis’ of spending a LOT of time with all our Portuguese friends, maybe it is not so strange after all!

I certainly feel an extremely strong connection to the Portuguese culture through music, the food, the traditions, and just being a part of so many of our friends’ celebrations and daily lives. This is the reason I have entitled these articles “Almost Portuguese”.

a true story that is heartwarming, extraordinary, and surely one-of-a-kind

As I have mentioned in a previous article, I love Portuguese music. And I want to tell you a story ABOUT Portuguese music, a true story that is heartwarming, extraordinary, and surely one-of-a-kind. I don’t think you will have heard it anywhere else! It was an experience I had with my dear friend Evelina about, oh, maybe 10 years ago. Evelina was sweet, fun-loving, caring, devoted, and just a beautiful person in every way. She loved music, loved enthusiastically singing Portuguese songs and loved listening to Portuguese music. We spent many social evenings together enjoying music at her house, whenever she had company over for dinner. 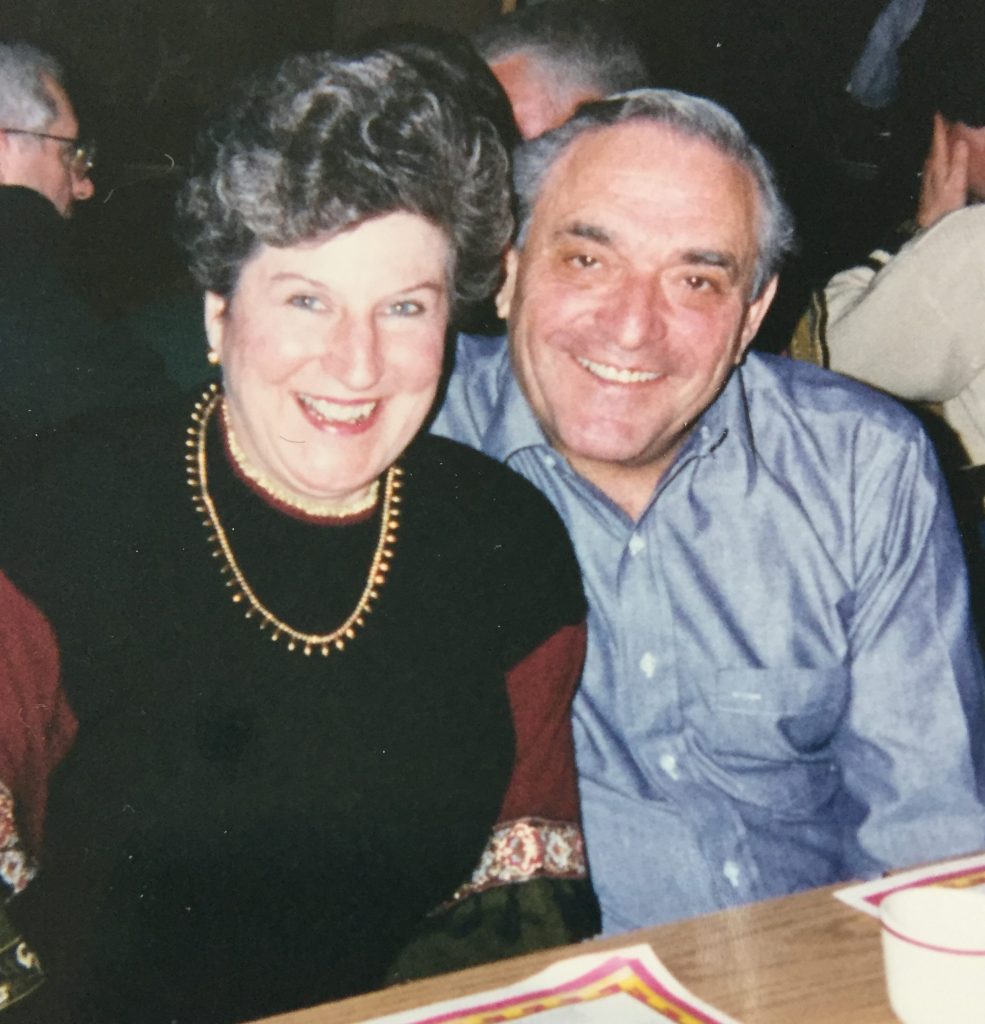 She always asked me to play the piano. Her piano was a spinet, not exactly worthy of concert hall performances, but it was definitely more than adequate to enjoy some informal music times together. She would first ask me to play something Classical for her. (She never asked me to play for ‘everyone’. it was always “play for me.’

She knew that I was a trained Classical pianist, and she just loved listening – whether it was Chopin or Beethoven or whatever I felt like playing. After that, she would pull out her Portuguese music book- and THEN, the real fun started.

Evelina would sing her little heart out! People joined in and sang with her. We all had such a great time.

I would sight-read all the old traditional songs, like “Uma Casa Portuguesa”, or “Lisboa Antiga”, or “Coimbra é Uma Lição de Amor!”. And Evelina would sing her little heart out! People joined in and sang with her. We all had such a great time. Everyone would try to remember all the words of the old songs, harmonize if they were so inclined, and often end up laughing more than singing. I just loved being a part of these impromptu music sessions.

Evelina once came over to my house after she had been visiting her home back in Graciosa. She handed me a present. When I opened the package, I was in shock: it was a stack of painstakingly HAND-COPIED Portuguese songs that she had gotten from an old friend in Graciosa. I still have these pieces of music and will always cherish them. “O Immigrante”, “Canta Lisboa”, “Julia Florista”, “Marcha da Bica”, and many more. I would play them for her whenever we were together with other people either at her house or mine. 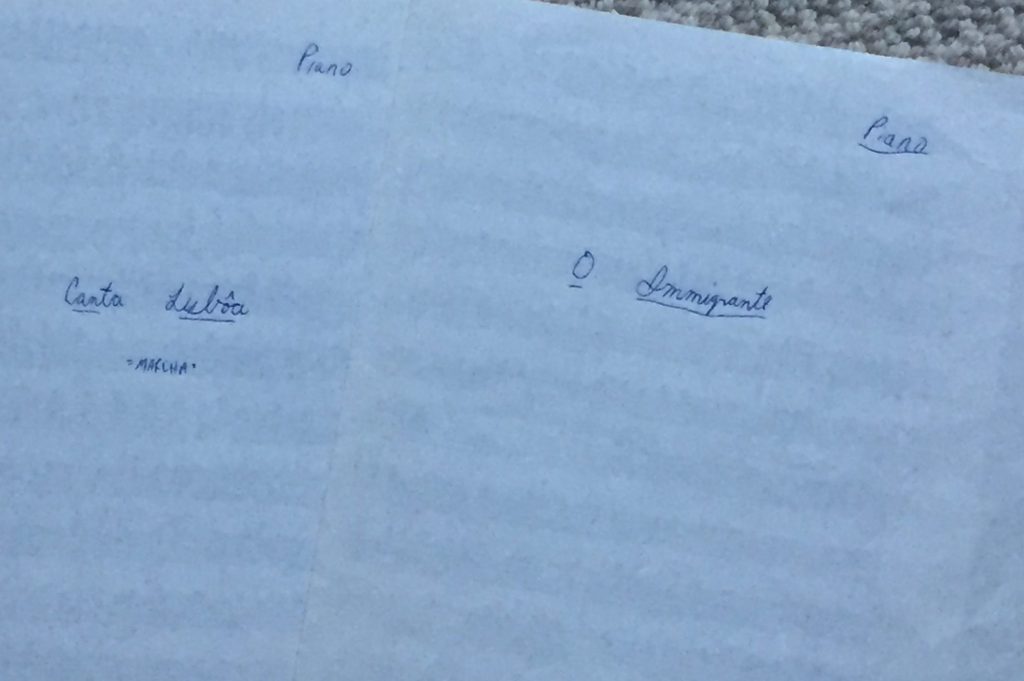 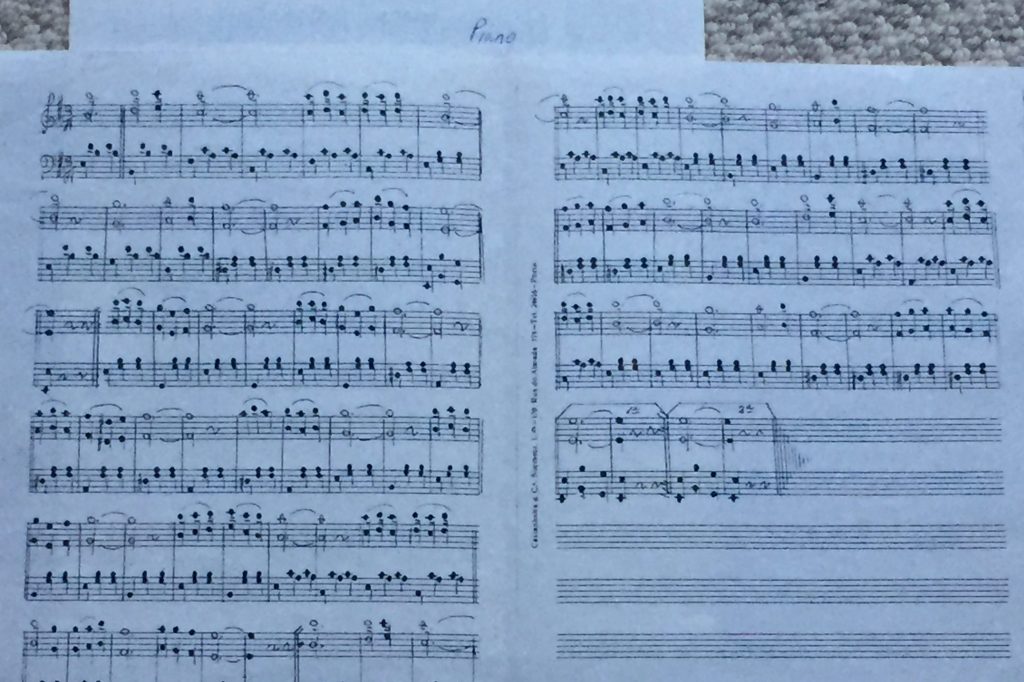 Then, one day, she handed me a double-page of sheet music- a Classical piece. She said it was very special because it was so exquisitely beautiful. When she immediately asked me to please go over to the piano and play it for her, I told her that I couldn’t just sit down at the piano and play it because this composition was far too difficult, but I promised that someday I would play it for her once I had really practiced it. The name of the piece was “Le Lac de Come” – it was a Nocturne by the French composer Giselle Galos, and it was arranged by Portuguese Professor Campos Coelho.

we all wished we could DO SOMETHING for her, as she had spent her whole life doing things for other people

A few years went by, and I didn’t learn the piece. It was on my proverbial To-Do list, but I had not gotten around to practicing it in a serious way. Then, unexpectedly, Evelina got sick. Very sick, with no hope of recovering. It was such a sad time for all her friends and family, and we all wished we could DO SOMETHING for her, as she had spent her whole life doing things for other people. But what can you do in such a situation?

I had a thought that perhaps one thing I COULD do for her was finally learning that piece of music and play it for her. So I tried hard to work on it. But things happened very fast. Her illness progressed rapidly. About a month later, when I visited her, I told her that I had a surprise for her. She saw the piece of music tucked under my arm and immediately knew what the surprise was. So she sat on the couch in the living room with a blanket wrapped tightly around her, and I sat at the piano and finally played the piece for her. I can’t tell you what an emotional lift that gave her! You can imagine that there were many tears from both of us, but her eyes still sparkled the way they always did. And even when she was so very sick, she was still able to find a measure of JOY in the music.

it was a time many of us will never forget

She died soon after. And her family asked me if I would play a song at her funeral as a special tribute to Evelina. I knew which song it had to be, but there was only an organ in the church. No piano. Here’s the unbelievable part: the family actually moved her piano from her house to the church! They thought it would be even more meaningful if the song were played ON Evelina’s piano. So I did my best to perform this composition that she loved so much. It was an unusual moment, to say the least. The priest said he had never seen such a beautiful ‘send-off’. (To add to the irony, I am Jewish.) But it was a time many of us will never forget. I certainly will always remember every detail: thinking about my friend Evelina, who loved music so much. We enjoyed it together for many years, traditional Portuguese music and so many wonderful Portuguese songs, as well as the Classics. Even in the end, when she was struggling with her sickness, this ethereal-sounding piece, that was so breathtakingly arranged by Campos Coelho, found its way to giving her pleasure.

So that is my very special “Portuguese Music” story, and if anything in this world can be considered universally-bonding, it is music. Doesn’t matter if you are an American woman of Russian descent Iike me, playing a French-composed piece for a Portuguese lady like Evelina.

It is the music that reaches out and invites us to enjoy it TOGETHER.