“No dia de São Martinho vai-se à adega provar o vinho” is an old saying used at this time of year in Portugal. Saint Martin’s day, on November 11th, is when winemakers taste the new wine of the year. It is traditionally served with roasted chestnuts called “Magusto“.

Feel Portugal Magazine recently visited Running Brook Vineyard & Winery.  We entered the property off of a picturesque country road lined with trees and stone walls. Pedro Teixeira, a Portuguese dentist in Pawtucket, RI, and his wife Manuela welcomed us with open arms for a tour of their winery and a tasting of some of the wines and spirits they produce.

It was harvest season, a busy time of the year when vineyard visitors can see the grapes being snipped from vines by field workers who then bring them to the winery for crushing and pressing. Once inside the winery, they can taste a wide variety of locally produced quality wines.

As we entered the winery, we found Manuela bottling a limited batch of Cabernet Sauvignon from the 2017 harvest. While we waited for Pedro, Manuela told us about Pedro’s passion for winemaking. It all started with his grandfather’s influence when he was younger. He would help his grandfather and enjoyed walking through the vineyards with him.

Pedro and Manuela left São Jorge island in the Azores. Pedro left with his parents when he was 2 years old and Manuela when she was 22. The two met in California and married while Pedro was going to college. They then moved to Ohio where Pedro went to dental school. After his graduation, both moved to the East Coast where they established a dental office. “We feel at home here,” said Manuela.

The idea of having a vineyard started at the dental office. Pedro enjoyed having conversations with many of his patients who had grape vines in their yards. One day he met Manuel Morais, one of his patients, who was knowledgeable about grapes and had developed a vineyard pruning style for cool-climate viticultural regions called “tall grafts”, a process that Pedro will explain to us later.

The two visited many vineyards and wineries and decided to start growing Vitis Vinifera grapes to produce premium wines in Southeastern New England. In 1998 Pedro Teixeira and Manuel Morais purchased land in Westport, MA. They later purchased 167 acres of land in North Dartmouth, MA and built the existing structure where the winery is now located. In 2015 Morais retired from Running Brook and moved to North Carolina, and Teixeira continued at the vineyard.

“Making wine in stainless steel, glass or plastic containers is not the same thing as in wood barrels … fermentation dictates the quality of the wine.”

Pedro spends his time between his dental office and Running Brook Vineyard. As he walked over to us, with a big smile, Pedro said, “Today is my day off and this is my stress relief.” He went on and started telling us about the challenges and successes of operating a vineyard and winery in the cooler weather of New England.

While Manuela and Ian Edwards, the Operations Manager, were still bottling the Cabernet Sauvignon, Pedro pointed to two small oak barrels and said, “They say we can’t grow these grapes in this region, but we can.” He proudly handed us a couple of glasses for us to taste and said, “This wine was stored in barrels made in Portugal with American oak”. Pedro went on to say “Making wine in stainless steel, glass or plastic containers is not the same thing as in wood barrels … fermentation dictates the quality of the wine.”

This process influences the aroma and enhances the stability and complexity of the wine. Pedro told us that the flavor is influenced by well cultivated and ripened grapes which resemble certain fruits. Cabernet Sauvignon resembles red fruits like cherry, blackberry.  Chardonnay can have hints of apple, peach, and other citrus fruits. Vidal blanc can have hints of pineapple, kiwi, melon.

The winery makes about 25 varieties of wine annually. From whites, reds, rosé and port–like, all are 100% estate grown, vinted, and bottled. Some of the grapes used in making their wines include Chardonnay, Vidal Blanc, Cabernet Franc, Cabernet Sauvignon, Merlot and some unique grapes for port-style wines.

Pedro always had the desire to make a port-style dessert wine. Building on the excellent outcome, he had growing Merlot grapes, he decided to try making it. This initiated the idea of starting a new line of products like liquors and brandies.

He said, “The winery is very busy from spring to fall with the planting and caring of the vines, harvesting, crushing, pressing, and bottling wine from the previous year. During the winter months, other than tending to the wine, there is little going on. The distillery helps to keep us busy during this time.”

In 2014, RB Distillery was added and they started using grape mash, which is the leftover product after the grapes are pressed (grape skins, seeds, and stems). Pedro said, “In the past, the mash was discarded” but now it’s distilled by boiling the mash to create vapor and then condensing it into alcohol to make brandy with a blend of Running Brook grapes.

In 2016, RB Distillery expanded its distillery line, and now has 3 brandies, as well as grappa and a variety of brandy-based liqueurs. Pedro said, “We also started making our award-winning aguardente, liquors, and brandies in small batches, and this year we won the Best of the Best in Southern New England.” After having a taste of an excellent RB aguardente we headed out for a tour of the vineyards.

“This is what I do for fun. I have a great passion for the grapes and love to be outside in the vineyard taking care of the plants to make sure they grow healthy.” 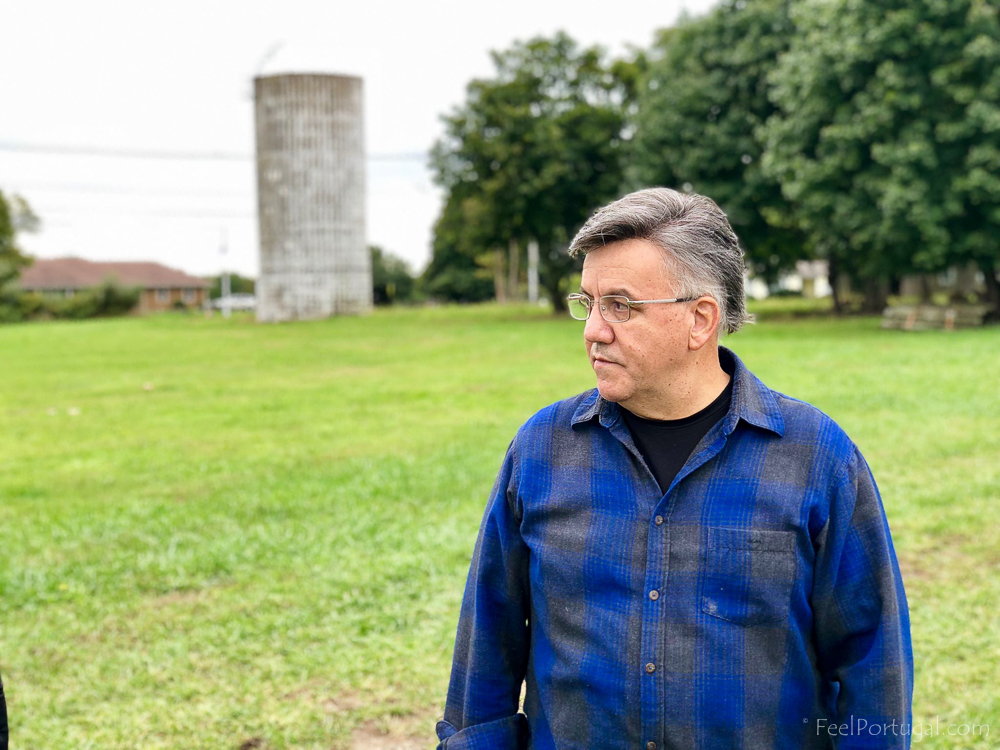 As we crossed a large open field between the winery and the vineyards, Pedro said, “We’ve had a few good parties here. Recently we had about 1500 people attending a “Badfish” concert and last August we had “Living on a Bad Name” a Bon Jovi Tribute band. They were both great events.” Running Brook Winery has entertainment every weekend.

We found out that Pedro is a big lover of fado, a music genre often referred to as the soul of Portugal. Over the years there have been many fado events at the winery. Some of his favorite singers include Amália Rodrigues, Maria Emilia and his friend Ricardo Ribeiro. He told us that, when he lived in California, he went to a concert by Amália Rodrigues, known as the Queen of Fado. On his way there, the car broke down and to his disappointment, he missed the show!

Once we were in the vineyard, surrounded by miles of grapevines, we could see Pedro’s enthusiasm when he told us, “This is what I do for fun. I have a great passion for the grapes and love to be outside in the vineyard taking care of the plants to make sure they grow healthy.”

As we walked through the vineyard, Pedro had us pick and taste some of the grapes and told us about their different characteristics. Some of the varieties we saw or tasted were the Vidal Blanc, Chardonnay, Pinot Gris, Pinot Noir. Merlot, Cabernet Franc, St. Croix, Petit Verdot Sauvignon Blanc, and the Cabernet Sauvignon.

Pedro explained to us that the Cabernet Sauvignon comes from two Bordeaux parent grapes, This new vine is the result of crossing Cabernet Franc and Sauvignon Blanc. It was not considered a noble grape until about  40-50 years ago. It is now an amazing and expensive wine. He said, “I think the most expensive bottle of wine is a Merlot but the Cabernet Sauvignon is up there too. As you can see the Bordeaux reds make the best wines in the world.”

All the vines at Running Brook are grafted. It’s a process of connecting a small cutting from the desired grapevine to an established root system of another grapevine that is more disease and cold weather resistant.

The vineyard is part of the Southeastern New England Wine Growing Appellation. It’s a cool-climate grape growing region featuring vinifera, hybrids and sparkling wines. The region stretches from the Cape and the Islands through South Coastal Massachusetts, Coastal Rhode Island and Coastal Connecticut, and captures the warm gulf stream waters in the summer and fall.

California vineyards, with lots of heat and irrigation, can produce up to 8 tons of grapes per acre. Colder climates like the East Coast can produce about 2 tons per acre. Therefore, Pedro has a smaller crop but he thinks he has more flavors and better quality.

Small local vineyards and wineries are important in the local food movement. Pedro said, ”More people are looking for the local taste, and grapes grown in this region have their own unique taste.” He went on to say, “Locally grown grapes have their own unique taste because of the soil and the climate where they are cultivated”. These unique properties of the grapes complement local produce, livestock, and fish.

Running Brook, the second largest winery in New England, is a member of the South Eastern Coastal Coastal Wines Wine trail. Pedro told us, “I’m not satisfied with being number two, but size isn’t everything.” As he expands his vineyards, he plans to enlarge the winery by adding a function room with decks overlooking the vineyards.

Pedro and Manuela would like to see the Running Brook legacy continue through their children. They are very happy with what the vineyard brings to their lives. They imagine this/the place as a sustainable local business making a difference in the local economy, as well as a great place for families to visit and enjoy the outdoors. As we left Pedro said, “I can’t imagine my life without the vineyard.”

Sao Martinho season is a time to enjoy wine and roasted chestnuts. Vsiting Running Brook made us feel Portugal in Dartmouth.