The 41st annual Rhode Island Day of Portugal festivities will take place during the weekend of June 9-10, 2018 in Providence at the Alex and Ani City Center.

This event-packed celebration will include a visit from the President of Portugal Marcelo Rebelo de Sousa, a special lighting of the WaterFire, and performances by Joey Medeiros from California and The Code from São Miguel (both are past IPMA winners).

There is an abundance of free entertainment planned including traditional dance performances, live music from several bands and singers, and a parade. The parade is expected to leave from the Rhode Island State House at 3 p.m. on June 10th and make its way to the Alex and Ani Center.

Of course, no party is complete without food, and there will be mouthwatering Portuguese food available for purchase.

The basin lighting for the WaterFire will be on Sunday, June 10th at sunset, around 8:20 p.m.

Another highlight taking place on June 10th is the Taste of Portugal, which is a private three-hour event for sponsors, ticket holders, and government officials. Those in attendance will get to enjoy live entertainment and savor typical Portuguese foods and wines.

This year’s grand marshals are the late Armindo Nunes and Alberto Nunes. They became well-known in the Portuguese community in Rhode Island for their tireless devotion to community service.

Advertising
“We believe that this year’s event was an opportunity for the 15 young women to learn about their culture, share their talents with the audience, and have fun in the process,” explained Agonia. “Some girls are even speaking Portuguese for the first time!”

Leading up to the Day of Portugal weekend there have been other activities hosted by the committee to bring the community together such as the Miss Dia de Portugal Pageant. Perhaps one of the most well-known contestants is 2009 winner Theresa Agonia. In 2015 she was crowned Miss Rhode Island which earned her the honor of taking part in the nationally televised Miss USA competition the following year.

Agonia hopes that the pageant serves as a stepping stone for these individuals to learn more about their heritage and to continue their involvement in the Portuguese community for years to come.

Other events hosted by the committee include a golf tournament, an annual breakfast, and a trap shooting tournament.

The Day of Portugal is celebrated nationally in Portugal on June 10th, which is the anniversary of the death of the renowned poet Luís Vaz de Camões. His most notable work is Os Lusíadas, an epic poem about the discovery of the sea route to India by Portuguese explorers led by Vasco de Gama.

It is anticipated that this festival will draw in a diversified crowd that will unite the multiple generations of the Portuguese community which is widespread in the area. These events are not exclusive to Portuguese people, and everyone is more than welcome and encouraged to go and enjoy the festivities.

For more details, you can check out the official Rhode Island Day of Portugal Website: www.ridayofportugal.org 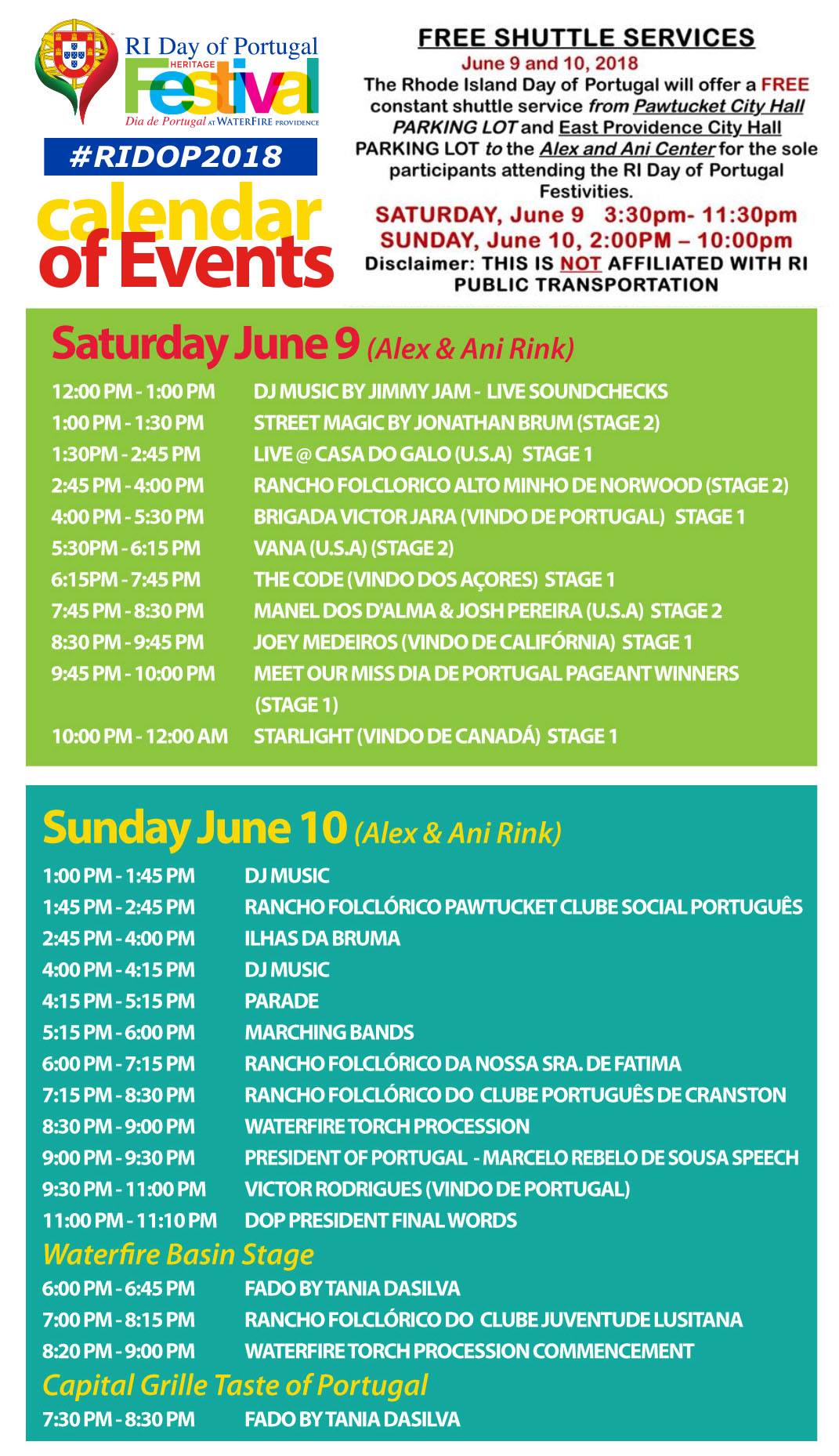 [accordions]
[accordion title=”About Day of Portugal” load=”hide”]What is the DAY OF PORTUGAL?

The “Day of Portugal” is a holiday celebrated every year on June 10th
in every corner of the Portuguese-speaking world. Officially known as “Dia de Portugal, de Camões e das Comunidades Portuguesas” (Day of Portugal, Camões and the Portuguese Communities), June 10th commemorates the death of the revered Portuguese poet, Luís Vaz de Camões in 1580. Camões is best known for his epic poem, Os Lusíadas, which is a tribute to the golden age of Portugal’s maritime exploration and discoveries.[/accordion]
[accordion title=”About Water Fire” load=”hide”]WaterFire Providence® is an independent, 501(c)3 nonprofit arts organization whose mission is to inspire Providence and its visitors by revitalizing the urban experience, fostering community engagement and creatively transforming the city by presenting WaterFire for all to enjoy.

This award-winning sculpture by Barnaby Evans installed on the three rivers of downtown Providence, has been praised by Rhode Island residents and international visitors alike as a powerful work of art and a moving symbol of Providence’s renaissance. WaterFire’s over eighty sparkling bonfires, the fragrant scent of aromatic wood smoke, the flickering firelight on the arched bridges, the silhouettes of the firetenders passing by the flames, the torch-lit vessels traveling down the river, and the enchanting music from around the world engage all the senses and emotions of those who stroll the paths of Waterplace Park. WaterFire has captured the imagination of over ten million visitors, bringing life to downtown, and revitalizing Rhode Island’s capital city. (read more)[/accordion]
[accordion title=” About Organizing Committee” load=”hide”]2018 DAY OF PORTUGAL ORGANIZING COMMITTEE