By Lusa News on November 9, 2018 0 Comments
Paddy Cosgrove (R), founder & CEO of Web Summit, accompanied by the Portuguese Prime Minister, Antonio Costa (2R), and Lisbon Mayor Fernando Medina (2L), during the night's proceedings on the the first day of the Web Summit in Lisbon, 05th november 2018. The 2018 Web Summit, considered the largest innovation event of startups and technological entrepreneurship in the world, takes place from Monday to Thursday (8 November) at Altice Arena and FIL pavillion, in Parque das Nações, Lisbon. JOSE SENA GOULAO/LUSA

Internet creator Tim Berners-Lee defended, in Lisbon, the creation of a “contract” between users, companies, and governments around the world to “make the web a better place”, reducing inequalities and improving issues such as privacy.

“We have to create a contract for the web. […] And this must be an agreement with several principles for people to join. So I am asking for your help, either through your company or by yourselves,” said the person in charge. 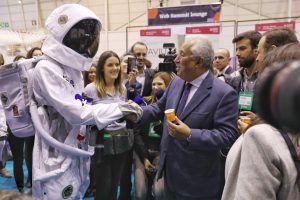 Prime Minister António Costa greets a participant dressed like an astronaut on the second day of the Web Summit at the Altice Arena in Lisbon. November 6, 2018. JOSÉ SENA GOULÃO/LUSA

Speaking at the technology Web Summit which took place this Monday through Thursday at the Altice Arena (formerly Meo Arena) and at the Lisbon International Fair (FIL) in Parque das Nações, Tim Berners-Lee said: “We are all responsible for making the web a better place”.

“I propose that you be part of this. We have managed to do it together”, he added, extending the request to “governments around the world”, which must be “sensitized.”

Tim Berners-Lee pointed out that in 1989 when he created the web he wanted it to be a free-access network that would serve mankind.

“And when no one expected, the ‘web’ created incredible things,” he noted.

However, in his view, they “suggest some concerns”, particularly in issues such as privacy and online security, which he pointed out by showing images of fake profiles on social networks and manipulation on the internet. 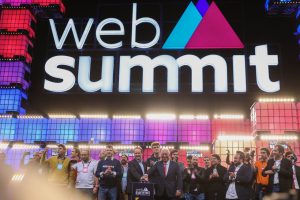 “We must protect ourselves,” Tim Berners-Lee noted.

Another challenge is how to make it possible for people to have access to the Internet, as only “one half” of the world can afford it at the moment.

It is in this context that the creator defends this “contract”, which has the motto “By the Web” (or as hashtag #fortheweb), in order to create values of equity and safety for all internet users.

“We need to make sure that people who are connected to the web can create the world they want and use it to correct the problems that exist,” he said, calling the internet “more peaceful and more constructive.”

For this edition, the third in Lisbon, the organization has already promised “the biggest and the best” ever, with news on the program and space enlargement, with more than 70 thousand participants expected from 170 countries.

The technological, innovation and entrepreneurship summit Web Summit was born in 2010 in Ireland and moved to Portugal in 2016 and since then has generated an economic impact of more than 500 million euros.

Initially, the summit was scheduled to last for only three years, but in October of this year it was announced that the event will continue to be held in Lisbon for another 10 years, that is, until 2028, with annual counterparts of 11 million euros and the expansion of FIL.

Last year, the event gathered, in the Portuguese capital, around 60 thousand people from 170 countries, including 1,200 speakers, two thousand ‘startups’, 1,400 investors and 2,500 journalists. 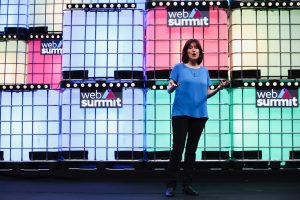 Google’s Vice-President for Product Management, Tamar Yehoshua, during her talk on the second day of the 2018 Web Summit in Lisbon, 06th November 2018. The 2018 Web Summit, considered the largest innovation event of startups and technological entrepreneurship in the world, takes place from Monday to Thursday (8 November) at Altice Arena and FIL pavillion, in Parque das Nações, Lisbon. JOSE SENA GOULAO/LUSA