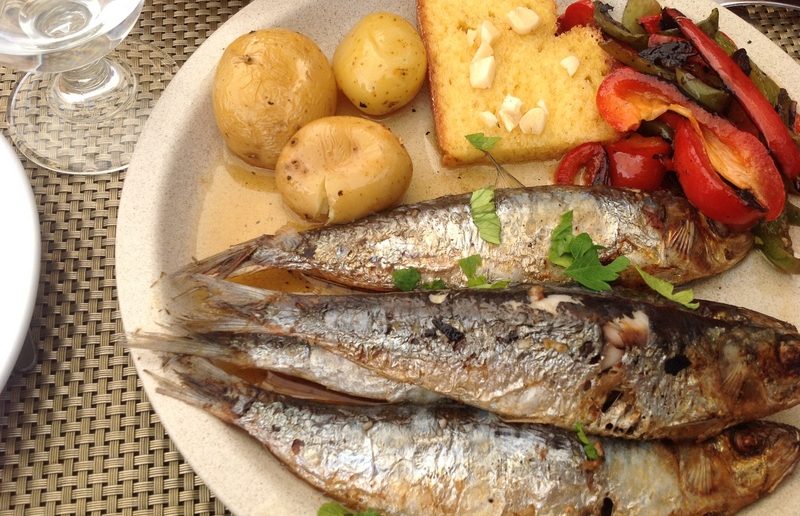 The Flavors of Portugal

So, you have decided to make Portugal your destination vacation this year and now, you are starting to wonder what the food is like and if you will even like it.  Although Portugal, located in the southwestern corner of continental Europe, west of Spain, where the western side of the Strait of Gibraltar meets the Atlantic Ocean, is technically not on the Mediterranean, the cooking style is definitely a reflection of Mediterranean flavors.   While multicultural restaurants are now more available in the larger cities of Portugal and its islands, and serving up contemporary fare, for an authentic experience, seek out Portugal’s traditional culinary fare which evolved from its melting pot of centuries-old influences of Mediterranean cultures.

The cultures of Italy, Greece, Spain, Turkey, the Moors, some Arab, the Phoenicians and others, traversed the land that is now Portugal, some occupying it at one point or another.  Over time these cultures left evidence of their cooking methods and ingredients.  Grapevine roots, olive, almond, lemon and orange trees were transplanted to the land.  The art of winemaking and the leavening of bread, the methods of frying meat after braising, and making casseroles were taught. The use of a mortar and pestle, to flavor meats by melding the essences of various spices into aromatic pastes and spice rubs, is still used today.  Added to all the above, the methods of preserving food by smoking, salting, using lard and olive oil,  gives you just a taste of the cultural legacies.

Portugal’s bounties from explorations to the new world and beyond, during the “Age of Discoveries,” included potatoes, tomatoes, chilies, tea and pineapples.  These new ingredients, together with spices from trade routes to the east combined with the established cultural influences to create one of the early examples of “fusion” fare, pulling the Mediterranean traits into what became Portugal’s own flavorful style of cooking.

Throughout Portugal, its archipelagos known as the Azores Islands, which lie west of the mainland in the Atlantic Ocean, and its island of Madeira, south of the Azores, common culinary traits and socializing over food are seen. Common methods, with variations by region, individual creativity and modernization, more often than not are quite similar. Home cooks use clay pots for stews and casseroles, cast iron skillets for frying, wood fired pits for grilling and large wood fired stone ovens for roasting and baking.  The same dish made in two different regions could have two different names. Methods of making wine, breads, cheese, and smoking sausages are pretty standard.  It is common practice to marinate raw meat in a garlic and wine/ vinegar solution for 24 hours to as much as three days.  Brining raw meats and poultry is used to “purify” them of residual blood left in the meat after slaughter. This gives way to moist meat with an amazing pure, less gamey flavor. Before refrigeration and still in some cases today, preserving meats and fish by salting and submerging smoked sausages in pots of olive oil or lard are recognized methods throughout the country. Country wide, whether it is a holiday, a religious feast or simple gathering, one’s family, friends, even unexpected guests go hand and hand with the sharing and enjoyment of food and wine. 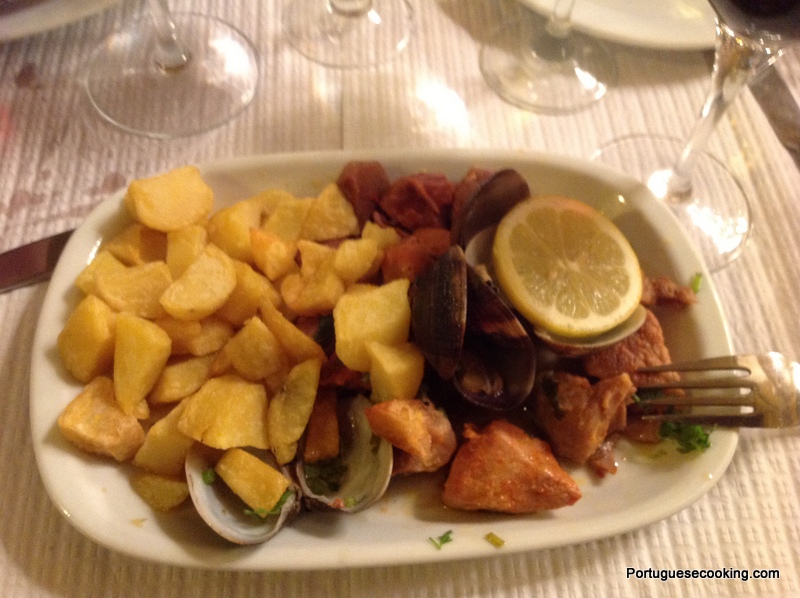 Sopa de Espirito Santo (Soup of the Holy Ghost) is part of the celebratory meal of thanksgiving that follows a beautiful procession and solemn mass for the Festa de Espirito Santo, The Feast of the Holy Ghost.  It is held on the seventh Sunday after Easter, mostly in the Azores. The “sopish” vary somewhat by islands but is essentially a heady concoction of meats, greens and broth perfumed with garlic, sausage, and seasonings. The meat is removed and served separately on platters while just the broth and greens are ladled over chunks of bread and fresh mint. The use of bread in all the versions is what makes it “sopish.”  Meatless “sopish” are followed with a course of beef, usually braised in a black clay pot with tomato, wine, bacon and Jamaican allspice, called Alacatra.  Still another version of “sopish,” is a richly flavored tomato infused pot roast ladled over mint and chunks of bread to sop up the juices.

Whether stewed, braised, grilled or roasted, cuts of lamb, goat, pork, beef, rabbit, duck, and sausages might lead one to think Portuguese cooking is all meat and potatoes. The people, however, consume a lot of soups and seafood as well.   Although vegetables and legumes are used in cooking, like sautéed leafy greens and roasted potatoes, you would traditionally find them mostly in soups.   Vegetables combine with or without legumes or meat, in a broth that is traditionally the sum of its ingredients.  A drizzle of olive oil and sprinkled seasonings, Portuguese soups, void of pre-made meat or fish stock, make for a nutritious meal in itself.   A chunk of bread, some olives and a glass of wine are the simple accompaniments. Today, Portugal’s cooking is evolving with a wider variety of vegetables, updated kitchens and inspired cooks who are reaching beyond the traditional to create new vegetable dishes but keeping its cultural flavor.

Seafood dishes are as much a staple as the hearty kale soups. I would be remiss if I didn’t particularly mention the revered bacalhau (salted codfish) and fresh sardines. It has been said the salted codfish, once only eaten by the poor, can be prepared 365 different ways.  Preserved in salt, then reconstituted in water before cooking, salting enabled cod to survive a once lengthy transportation to inland populations. According to oral history, the wealthy turned up their noses at the salted fish until they saw how the poor enjoyed it. Sardines, seasoned with salt and grilled over a wood fire, are typically served with garlic sprinkled potatoes drizzled with olive oil. Roasted peppers, sliced onions, greens, olives and crusty rolls add to make the meal a perfect match with chilled vinho verde wine.  Whether you pick tiny sweet clams infused with herbs, garlic and white wine or a tangy octopus salad, other dishes like Sapateira Receada, a confit of crab made into a spread, don’t pass on monkfish or seabass stewed, grilled, or baked with tomatoes, onions, potatoes or fried because if you are a seafood lover, fresh fish dishes in Portugal do not disappoint.

For the remaining half of your vacation, ponder Camarão Piri Piri, grilled shrimp simply flavored with a chili pepper concoction or Camarão com Caril, shrimp in a lightly spiced curry coconut sauce.  One of my favorite seafood dishes is Caldeirada, Portugal’s answer to the French bouillabaisse.  This stew, a conglomeration of fish in a perfectly seasoned vegetable infused broth, is cooked with just a bit of wine. The concentrated flavorful broth comes from the natural juices that are extracted from the fish. The stew can contain just fish, shellfish (Mariscada) or as I like it, a combination of both. Originating in the Algarve Region, Amêijoas na Cataplana is a well known dish using the tiniest of clams, the sweet amêijoas are infused with garlic, white wine and fresh parsley or cilantro, but mussels and other shellfish can be prepared in the same fashion. Traditionally it was made in a tin-lined copper cataplana pan; a hinged, bowl shaped pan that resembles a clam shell. Another popular dish born of the Algarve, Carne de Porco à Alentejana get its name from the acorn and chestnut fed pigs raised in the Alentejo region. Referred to as Pork with Clams, this popular dish is served up with the sweet clams mixed with fried cubes of marinated pork coated with a flavorful heady garlicky, wine, paprika, clam and cilantro infused sauce.  If you can’t make it to the Alentejo or Algarve this visit, make a point of dining at Casa de Alentejo in Lisbon to get a taste of this flavorful dish.

The popular ingredients of long ago influences, simmering in Portuguese soups, stews, seafood or vegetables, pair well with Portuguese wines.  The combination is a perfect blending of Mediterranean flavors.  Pick from light vinho verdes wines of the Minho, medium to full bodied Douro reds, or many of the Alentejo’s single grape varietals to match your meal.  Thinking dessert?  Does creamy cinnamon- dusted Arroz Doce, a sweet rice pudding, Sericaia from the Alentejo or Lisbon’s Pastel de Belem a luscious custard-cream tart tempt you?  Don’t forget to try Bolas de Berlim, a puffy, yeast raised sugar donut, with or without crème filling, from the popular Lisbon Bakery, Confeitaria de Nacional near Rossio Square.  Finally, for after dinner, consider savoring the Mediterranean flavors of your Portuguese meal by ending simply with a glass of Ruby or Reserva tawny port, or Setubal’s 20 year- old Muscatel dessert wine or Beirao Licor.  Saúde!