Trending
You are at:Home»Business»Last “Let’s Talk About Business” Workshop for 2018 Held in New Bedford

Luso American Foundation for the Development (FLAD) held The third and last in a sequence of “Let’s Talk About Business” workshops, for 2018, in the New England area. The workshops are geared towards people who are starting their own businesses and entrepreneurs who seek to acquire essential skills needed to start and run a successful and sustainable business.

The event took place in New Bedford at the South Coast Chamber of Commerce and started right after an award ceremony, where successful local Portuguese-American business owners were recognized by the Chamber.

Rick Kidder, President and CEO of South Coast Chamber of Commerce was the program moderator. He referred to the importance of the Portuguese businesses in the region, introduced the speakers and kept a vibrant dialogue among the participants. 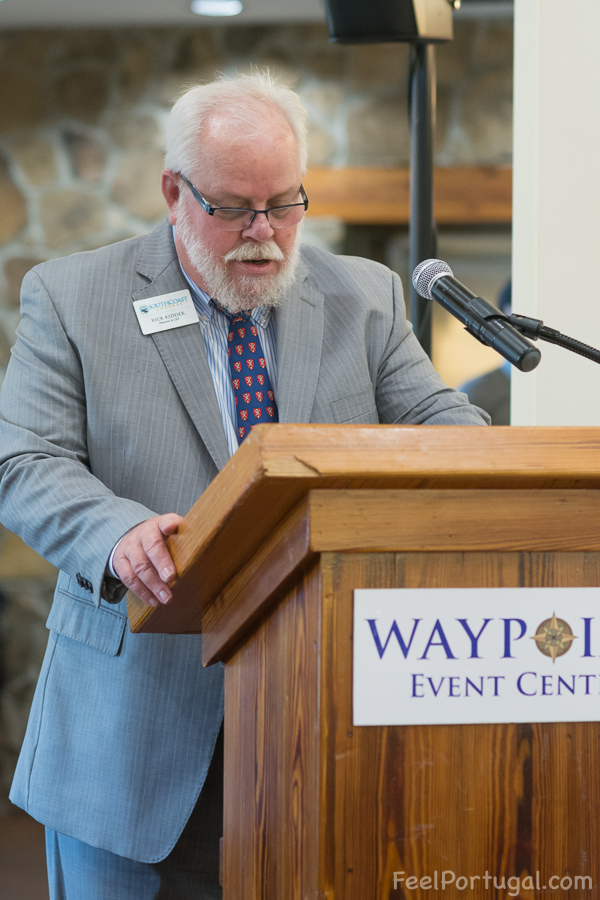 Carmen Monereo, the Program Coordinator, was pleased with the results of the “Let’s Talk About Business” workshops. She said that “the participation of the Portuguese American entrepreneurs in the three workshops and the quality of speakers, their experience and determination to succeed were very inspiring to the young entrepreneurs who were present at the workshops.”

Monereo thanked everyone who attended the workshop and presented a video to illustrate FLAD ’s mission. She also introduced Massachusetts State Representative, Tony Cabral, who spoke about FLAD’s developing strategies between the US and Portugal. 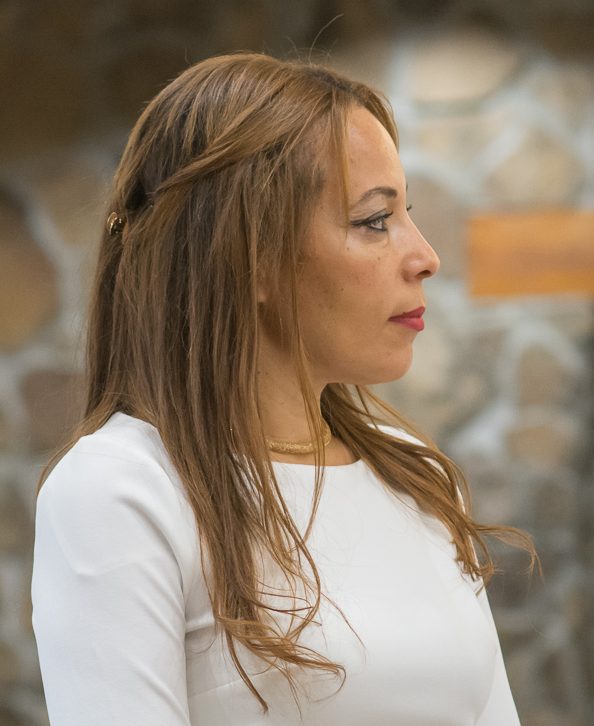 Tony Cabral spoke about FLAD’s significant investments in the Portuguese community throughout the US, mostly in the East and West coasts. These investments benefit educational and cultural institutions, particularly in New England.

Cabral also mentioned that in the last five years FLAD developed strategies around businesses in order to improve and connect the Portuguese American community and Portuguese businesses.

According to Cabral, renewable energy is a successful example of the Portuguese investment in the US and vice versa. Cabral said, “Portugal is a leader in the renewables, both wind and solar, there are days in Portugal where 70% of the usage in the country is from renewables and their goal is to be 100% Renewable”.

He ended by mentioning that the goals of the Foundation are to get the Portuguese American community involved, get to know each other and making the connections with Portugal as well. “Flad can help you not only as a community but also individually, and business to business that’s one of their mission and goal as well,” he said. 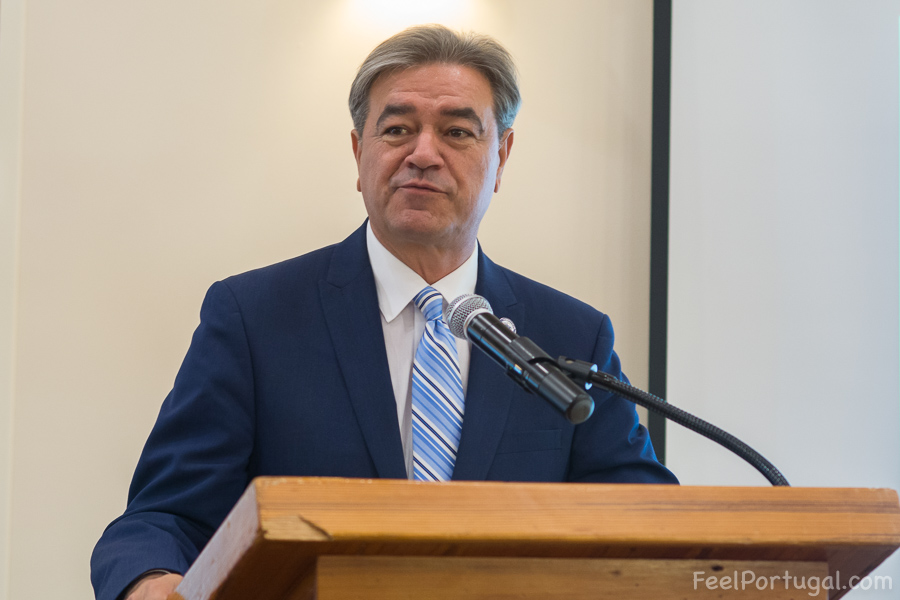 Shelley Pires, Consul of Portugal in New Bedford, spoke about the Office for the Investor of the Portuguese Diaspora and how it works. The goal is to promote and facilitate business links between Portugal and its communities abroad, including those of Portuguese ancestry.

Investors meet annually in Portugal to network. The next scheduled meeting takes place in northern Portugal in December 2018. Pires said “The goal is not to subtract from the countries where Portugal is but to grow the relationship, develop understanding and bring both together”

Another network that works with the Office of Foreign Affairs, is a Network of the Immigrant Support Offices that are spread over 200 City Halls throughout Portugal. They are equipped and specialized in giving the necessary information to establish a business in Portugal.
“These resources have been very helpful to many Portuguese Americans and Portuguese all over the World,” said Pires. 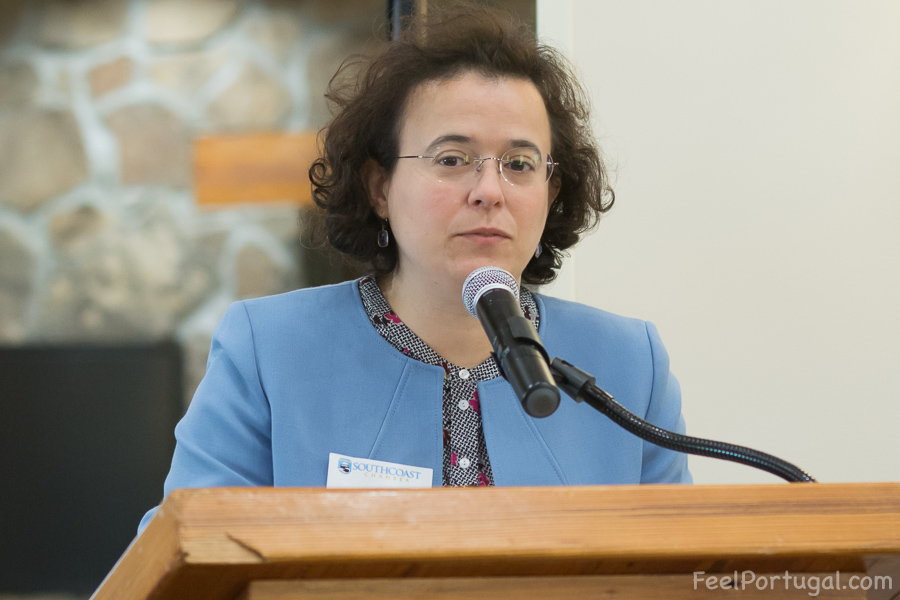 James DeMello, a 2nd generation Luso-American, is known as a fierce advocate of the Portuguese community, his philanthropy and his business savvy. His grandparents came from the Azores and from mainland Portugal.

DeMello, while in college, started working at the Acushnet Rubber Company in New Bedford, he continued there after he graduated and eventually purchased the company. The company expanded to the point when it had about 1,400 employees.

After selling the company and retiring, DeMello said “I didn’t want to spend my life at the beach”. He purchased the Old Compass Bank building located in downtown New Bedford, modernized it and renamed it DeMello International Center for Business and Education for the Next Generation.

“Education has added value for Business,” said DeMello. He then went on to say ”without education and the sacrifice of my parents I would not have been successful”. These words compelled him to develop a DeMello International Center and Lesley University partnership with the goal of providing affordable and flexible educational programs for adults in New Bedford.

“Education is of great importance,” said DeMello. He ended his presentation by saying “Education is the key. Yes I can” 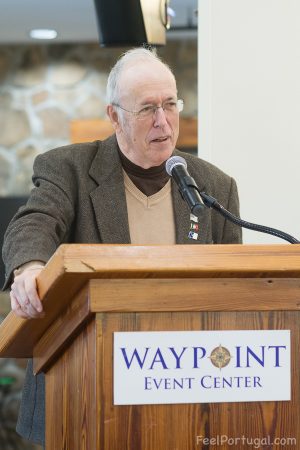 Rose Jardim, a Chartered Accountant experienced in public accounting and corporate tax issues, provides services to small and medium-size businesses. Her topic was “Your company Your investment: Things your accountant should be telling you”.

Jardim described the various types of legal structures and benefits as a sole proprietorship, partnership, LLC’s and corporations. She also spoke about the importance of paying attention to cash flow and setting up budgets. “It’s Important to look at cash flow and try to improve it”, she said.

There are many tools available online to business owners. Some of the products she mentioned included Quickbooks online, invoicing, mobile payments, time tracking software, paperless document sharing, email, google drive, and other applications. 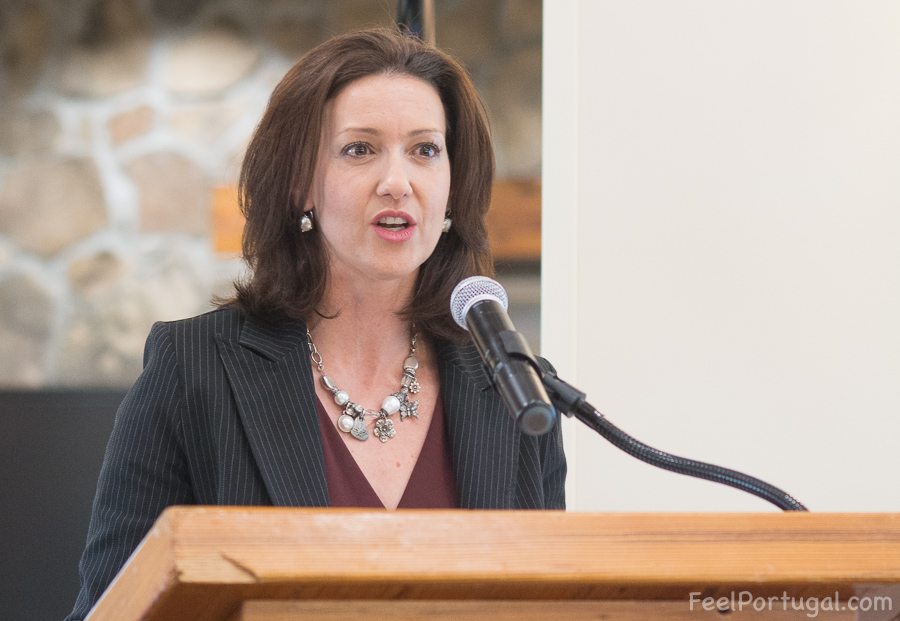 Benquerença said that after the financial turmoil in Portugal, the economy was stimulated by government measures which brought confidence to investors and resulted in a steady reduction in the unemployment rate. Benquerença said “2010 unemployment was 18% in 2018 is 7%”

Nowadays, as Consul Shelley Pires previously mentioned, Portugal has incentives to bring back those who left and have skills. This might help boost the economy.

“Portugal is becoming more competitive and attractive to new businesses,” said Benquerença. Some of the reasons may have to do with its quality of life and high rankings as a modern country with great infrastructure. Investors find it attractive especially in the areas of automaking, shoe and textile manufacturing, new technologies, science and Innovation because of its qualified labor with language skills.

Benquerença spoke about how TAP’s American investment has broadened the airline’s services which, in turn, attracted more business people to Portugal. The company increased the number of passengers every year with its stopover program. These measures also improved the ecosystem for startups and the development of the two main cities, Lisboa and Porto. Portugal has the potential of 260 million Portuguese speaking customers and is the gateway to Europe.

Benquerença made it clear by saying that “People who want to do business in Portugal should contact AICEP” and she finished by saying “Invest in Portugal: The Right Choice. The Right Time” 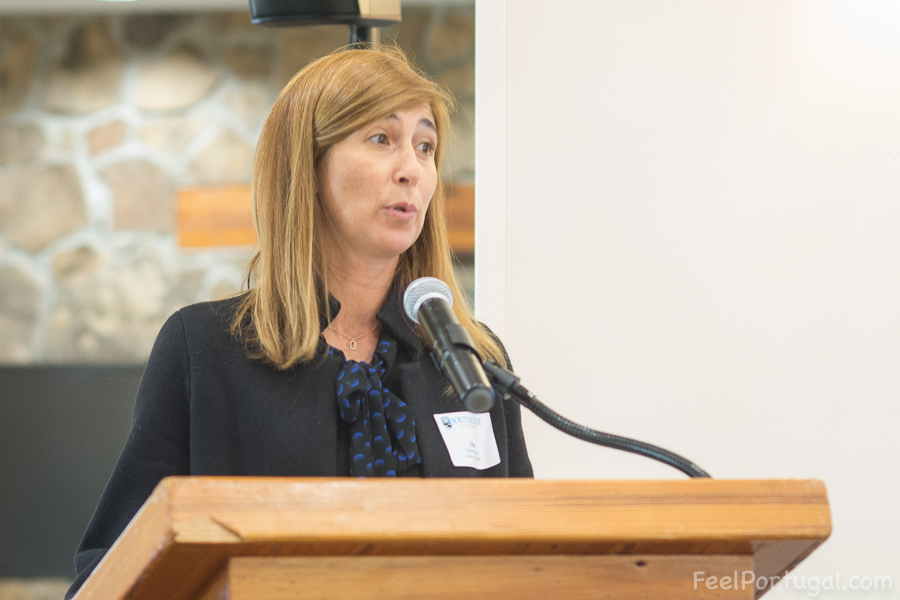 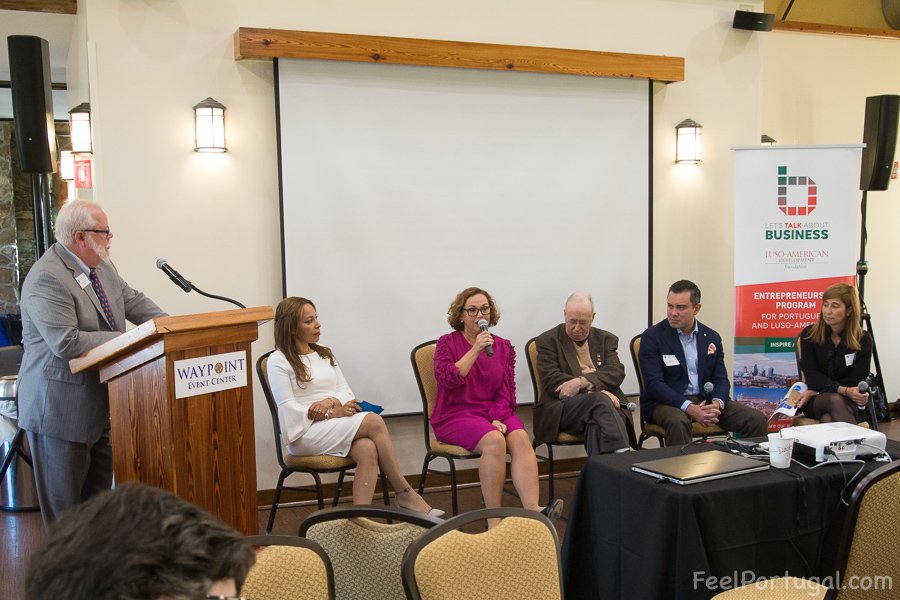 After the initial presentation by each of the featured speakers, the workshop moved into the panel discussion phase “Successful Business Experiences: Storytelling and Discussion Panel”

Horacio’s is a metal fabrication company with customers nationwide. It was founded by Michael’s father, Horacio Tavares, in 1980. In 2007 Michael took over the family business.

Tavares is an example of a young entrepreneur who took the risk to expand his father’s company to another level. He said, “Risk equals growth and failure equals learning”. He believes in investing in education as a path to success. He said that he learned from his father when he was young, from his education at school and from his experience when he worked for Johnson & Johnson.

The above combination of skills and experiences were essential to the rebranding exercise of the company, which is now equipped with brand new machinery and employs 200 people.  He believes that people with soft skills are easier to train and to integrate into the culture of the company.

Michael’s family immigrated to the US from Sao Miguel, Azores in the early 1970s and settled in New Bedford. 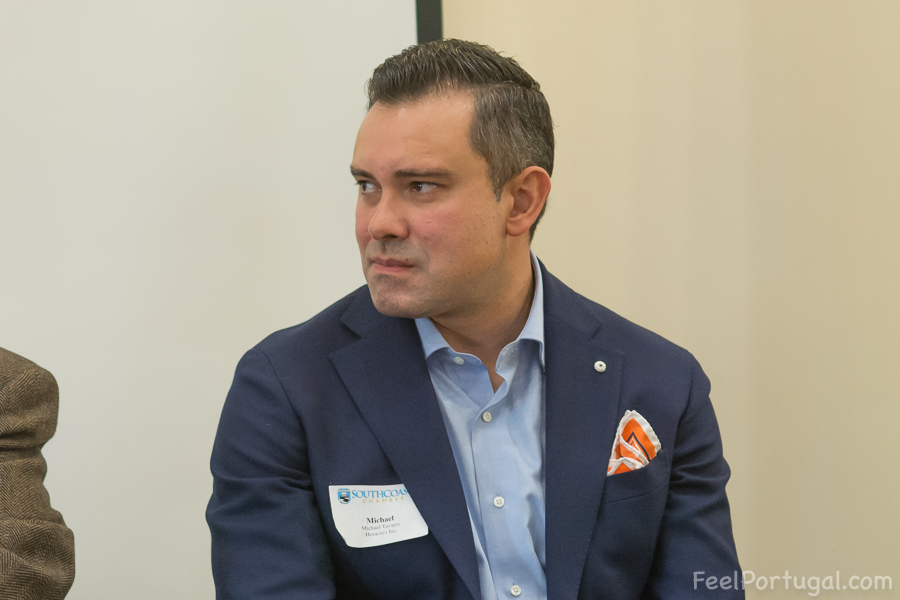 Owned by owned by Henry M. Arruda and his wife, Paulina Arruda, WJFD-FM  97.3 is a commercial radio station located in New Bedford, Massachusetts. It’s the only 50,000-watts FM radio station broadcasting in Portuguese 24 hours per day, 7 days per week and 365 days per year.

The station has a 600’ tower in the New Bedford which, during a recent storm, was damaged by a lightning strike and had to undergo expensive repairs. Broadcasting since the 1950’s and reaching an audience of about ½ a million listeners in Portuguese, Brazilian and Cape Verdean communities throughout the Eastern New England region.

Arruda said that one of the challenges is to find out what music to play in order to attract the “age group with buying power”.  She went on to say that some of the other challenges for radio stations like WJFD 97.3 FM include the higher wages needed in order to acquire new employees, keeping up with new technology and finding ways to reach a wider audience that includes younger and more affluent listeners. 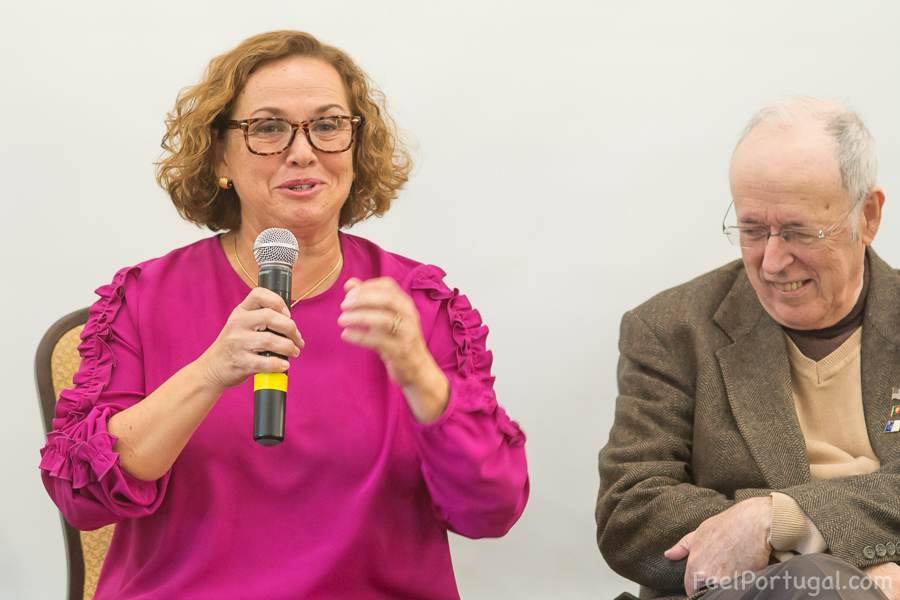 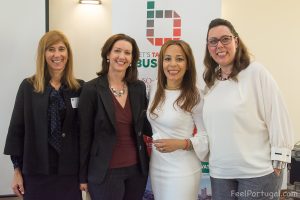 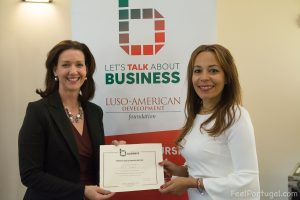 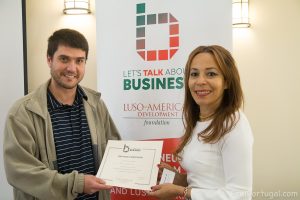 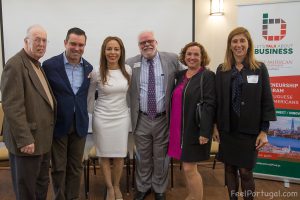 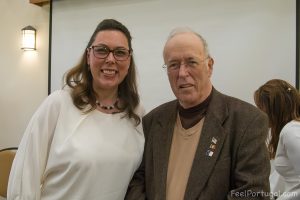 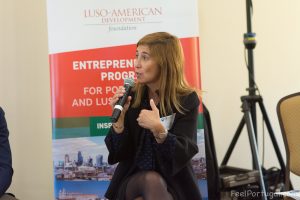 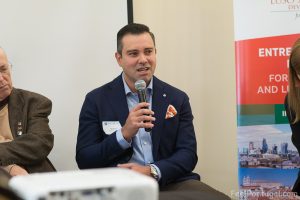 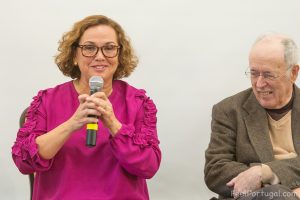 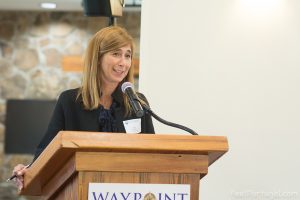 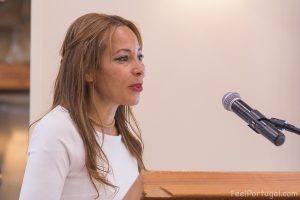 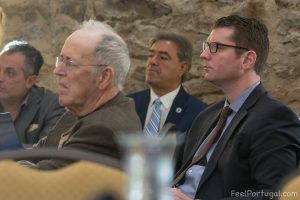 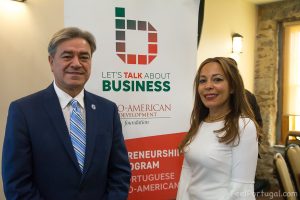