Trending
You are at:Home»Featured»The Power of Pictures

I often wonder if the song “Pictures of You” by rock band The Cure could have been a Fado. If Robert Smith, the lead singer, and guitarist of the band had been born in Portugal rather than Blackpool, England it certainly would have been. I can remember the day in May 1989 when I first brought the CD and I popped it into the player and heard this magnificent song. I felt a connection with the song because it struck a chord in me.

“Pictures of You” is about lost love and how the singer only has pictures of his former lover and the deep emotions it solicits. The connection felt stems from the fact that my family, like so many other Luso-descendants scattered around the globe, treasure the still images of loved ones far away and of family and friends long departed. The images stir very intense and deep emotions. These feelings of longing or, as we call it, “saudade” are very powerful. Even more so before the advent of video phone calls and digital photography.

A picture was an heirloom. It was a special memento of an event that was treasured and celebrated.

A picture was an heirloom. It was a special memento of an event that was treasured and celebrated. A roll of film wasn’t infinite forcing you to think twice before taking a picture. The printing process took days and the photographs you received were limited and not easily shared unless you ordered more prints. Hence, the print was a precious thing to be carefully kept and revered.

For Portuguese immigrants (and countless other immigrants) the photographs of loved ones were especially treasured. You clutched them close to you when traveling, not trusting them in your checked luggage or baggage. The pictures were a lifeline back to loved ones left behind in Portugal. Likewise, the family and friends you left behind in Portugal, had their own photographs to remind them of loved ones far away. In my house on Elm Street in Newark, New Jersey we had pictures of my family from Portugal. When I wrote to them, I would place their photographs near me to create a virtual experience. My great aunts in Portugal had photographs of the entire family around their television to which they spoke to when they felt lonely.

Saudade encapsulates yearning, longing, sadness, reminiscence, and love and it is woven into our history.

As a young kid I never understood this but later when I was older it totally made sense. This was how they coped with the “saudade” that dwelled inside. The term “saudade” is difficult to explain. Often the word “longing” is used but I don’t think it fully expresses the emotion. Saudade
encapsulates yearning, longing, sadness, reminiscence, and love and it is woven into our history. From the earliest periods when Portuguese explorers, fisherman, and naval personnel took to the seas saudade became entrenched in our hearts, minds, and souls. It is the driving force of Fado that sometimes brings a tear to the eye when we hear it.

The Portuguese are restless people. Perhaps it is because our ambitions and aspirations cannot be contained on the tiny portion of the Iberian Peninsula we occupy. Perhaps it is because Portugal was modest in economic terms for most of its history forcing many to migrate for a better life. So, whether it is for fortune or fame we are a migrant people which means loved ones are always left behind. It is a theme in our history and culture. I can never remember a time that I didn’t feel “saudade”.

In my opinion, the most moving expression of “saudade” come from Camões’ Os Lusíadas.

“Saudade” isn’t depression or emotional distress. It is a state of being that involves many emotions like sadness, love, happiness, hope, acceptance, serenity, pride and pensiveness all at the same time. In my opinion, the most moving expression of “saudade” come from Camões’ Os Lusíadas. It is a poetic manifestation of saudade. As mentioned before “saudade” is the basis for the unique musical genre of the Fado. You can’t have Fado without “saudade”.

Photographs were, therefore, artifacts in the time before the Internet and digital cameras. They evoked emotions, memories and told stories. They were powerful beyond anything we can imagine today. Photographs today are snapshots of a finite moment in our lives. We take pictures of everything now so each 21st-century photo is more like a sentence in our lives while in the past a photograph was an entire chapter. Photographs today are taken like notes in a diary. When people eat a great meal, for instance, they take a picture to memorialize it or post it online to let everyone else know they enjoyed it. People take photographs to capture an emotion or singular moment in their lives. I am not criticizing the practice because I do it myself. I am just pointing out how photographs today have a different context than they used to.

A photograph was an analog storage unit for our lives. An image captured in time would not only store the people or scenery in the frame but would later be filled in with stories and emotions by those it encountered. For this very reason Portuguese households (as I am sure many other cultures), the world over would clutch to photographs as a lifeline back to loved ones or to a special moment in their lives.

I can remember sitting for long afternoons with my great aunts looking through albums. They would come upon a particular picture and it would somehow access the stories of the people in them. I never grew tired of listening to these stories. So, it is no surprise that photographs were left in wills and hotly contested after a family elder passed away. After the assets of an estate were divided families would quibble over photos. When my grandfather died my father and his siblings sat around a table and divided up the photographs that my grandparents kept over the years. The process was a difficult one especially since digital scanning wasn’t available.

The experience was emotional. The most startling experience came from a photograph that my mother brought back with her from Portugal.

Four years ago I took it upon myself to gather up all the photos my family had. I asked all my aunts and uncles to give me their photographs for scanning and restoration. The experience was emotional. The most startling experience came from a photograph that my mother brought back with her from Portugal. 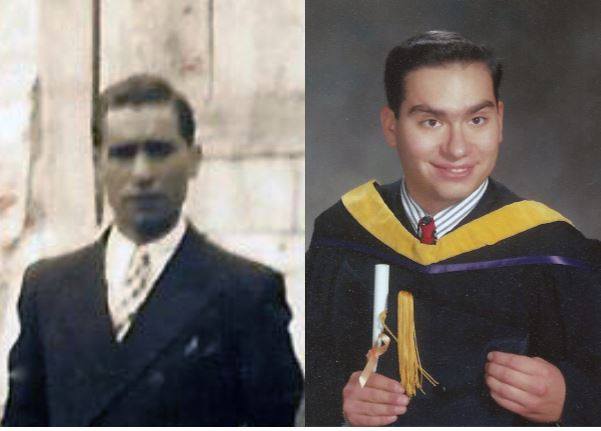 Photo of Nelson de Sousa with his maternal grandfather

After her aunt died my mother and my aunt (her sister) sold the house that they grew up in. They found all the pictures my great aunts kept and carried them on the plane back to America. As I was rummaging through the photographs, I found a picture of my grandfather (on my mom’s side) who left for Brazil never to be heard from again. In the photograph, my grandfather was young perhaps in his twenties. I had never seen the photo before, and it sent chills up my spine.

I saw myself staring back at me from the photo. When we were both young, we looked alike. People always said I looked like him but the only other photo of him was later in his life. While I saw some resemblance in the picture it didn’t really look like me. This earlier image of him, however, really showed the resemblance. So, I wonder what stories lay hidden in this image. All that remains of him is two pictures and a lifetime of despair for my grandmother, mother, and aunt which explains why it’s being hidden all that time. Photographs are powerful things that sometimes are too much to look at. I can imagine my grandmother evoking the sentiments that Robert Smith sang about all those years later.