Trending
You are at:Home»Education»Oprah Helps UMass Lowell Raise Over $3 Million for Scholarships

By FeelPortugal on November 19, 2018 0 Comments
LOWELL, Mass. – UMass Lowell thought it was saving the biggest news of the night for the end.
Oprah Winfrey had even bigger news.

After Chancellor Jacquie Moloney announced that UMass Lowell had raised more than $1.5 million for scholarships at the Chancellor’s Speaker Series Thursday, Nov. 15, Winfrey pledged on stage to match it. 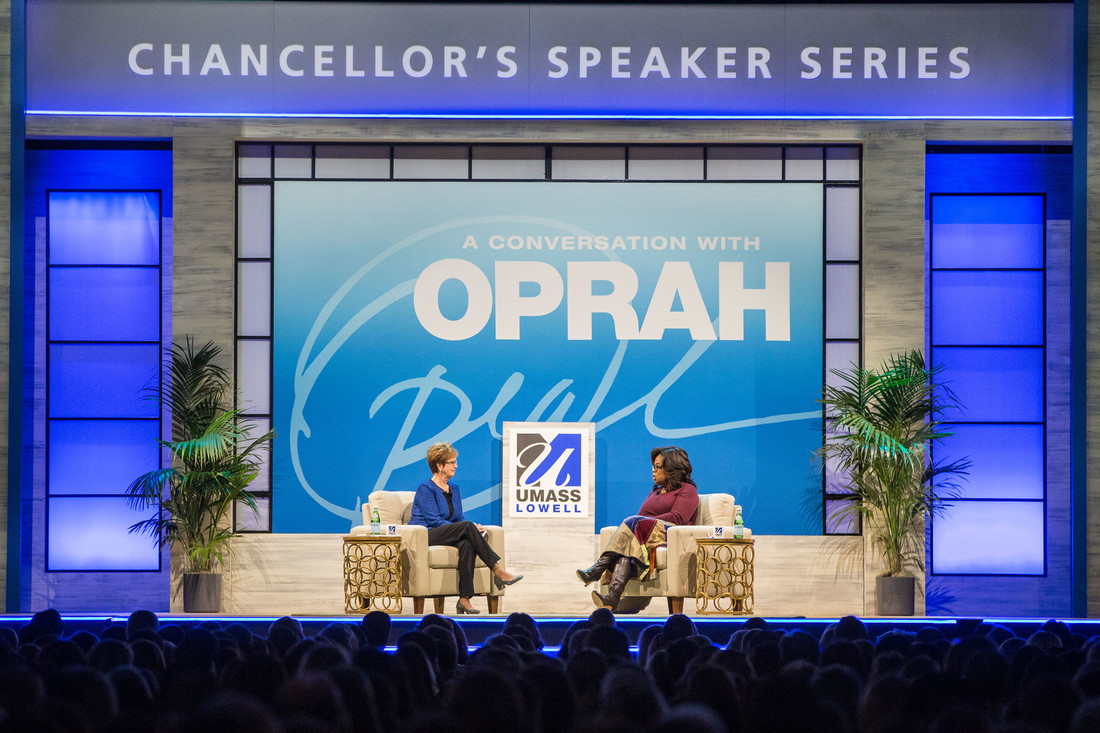 More than 6,000 people listened to the nearly 90-minute conversation between Winfrey and Moloney, which touched on education, gratitude, “The Oprah Winfrey Show,” her work with children in South Africa, a 10-day visit with Nelson Mandela, and her commitment to living a life of purpose and service.

Earlier in the day, Winfrey met with more than 200 UMass Lowell students for a master class that provided students with the opportunity to ask her questions.

The evening concluded with the introduction of the first six Oprah Winfrey Scholars and the presentation to Winfrey of an honorary doctor of humane letters degree by UMass President Marty Meehan, UMass Board of Trustees Chairman Rob Manning and Chairman of the Committee on Academic and Student Affairs Trustee Imari Paris Jeffries.

“Oprah Winfrey’s visit will provide scholarship support for UMass Lowell for years to come,” Moloney said. “We are so honored to share an evening with one of the most powerful and most positive people on Earth.” 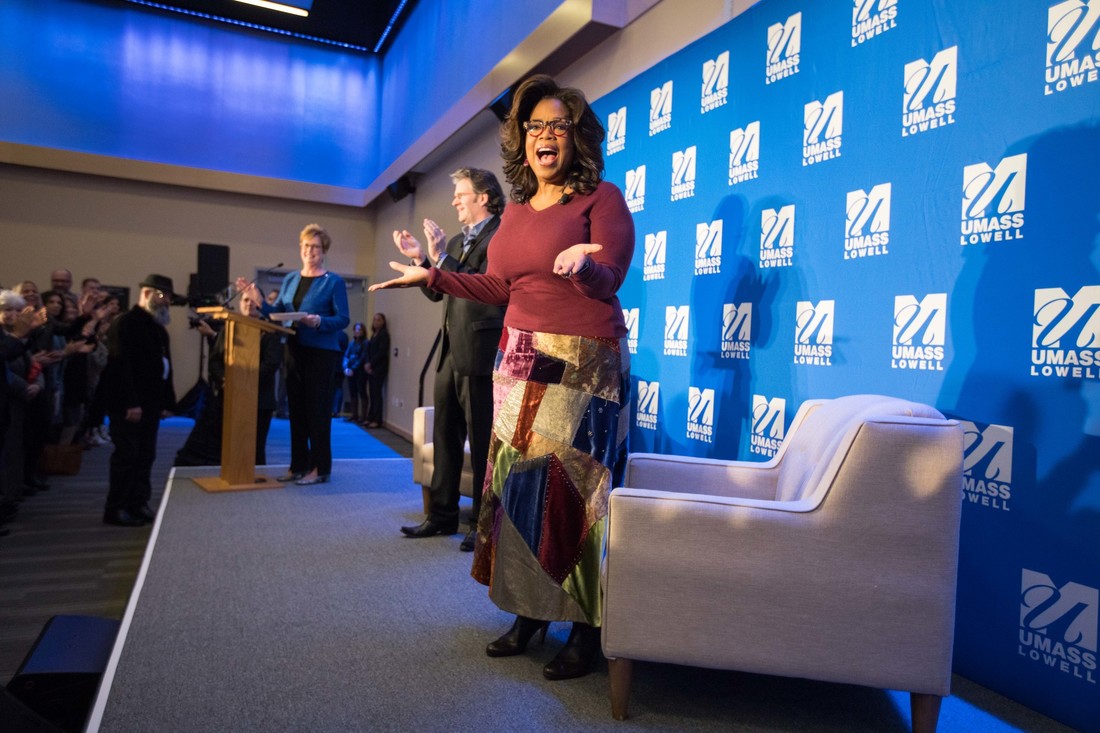 Asked by Moloney why she had decided to spend her night at UMass Lowell, Winfrey pointed to the goal of the Chancellor’s Speaker Series, saying she decided to come when she learned the university would use the event to raise money for scholarships.
Lowell was also on Winfrey’s radar thanks to one of her Oprah’s Book Club recommendations: “House of Sand and Fog” by UMass Lowell English professor and best-selling author Andre Dubus III. Winfrey said Dubus was one of the few authors she featured who wrote her a personal thank you note, something that stuck with her.
Moloney and Winfrey also discussed the value of education, including offering a standing ovation to the many teachers in the audience.
“The only way you change a life is by changing the way someone thinks about their life, and you do that with education,” Winfrey said.
Winfrey ended the night with a piece of advice for the audience.
“I try to do the right thing even when no one is looking,” she said. “When you don’t know what to do, do nothing until you do know. There is that still, small voice inside of you that always – always – has the answer.” 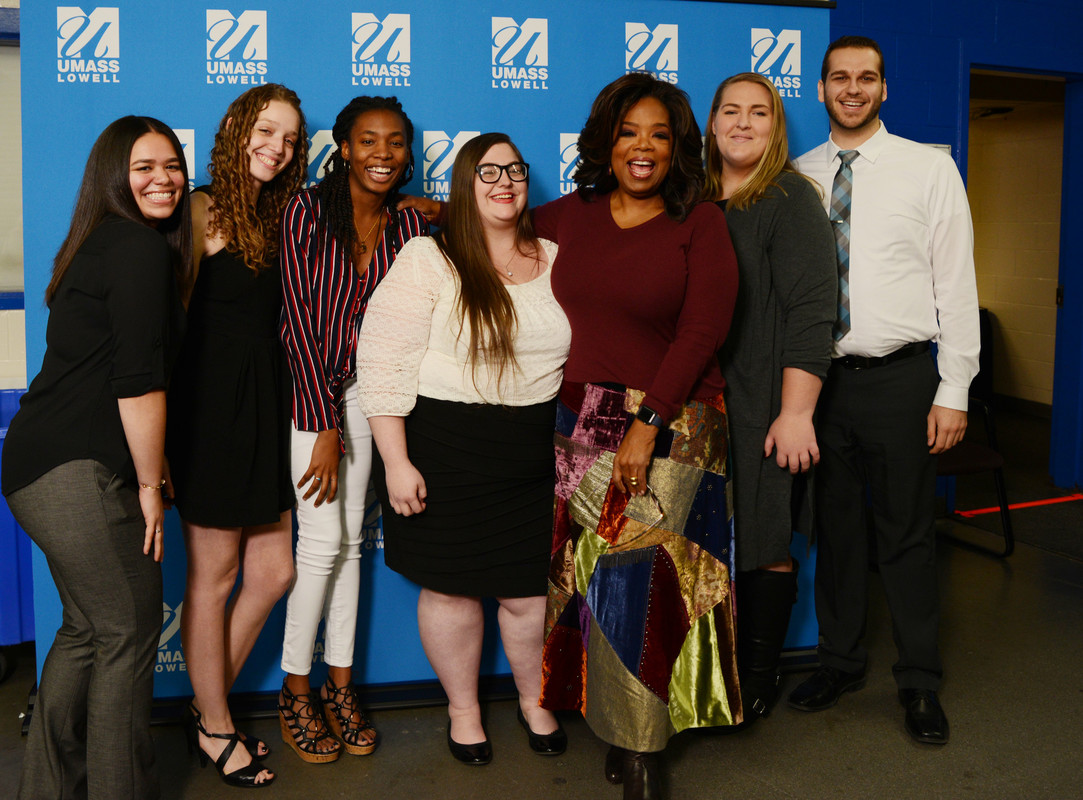 The Oprah Winfrey Scholarship will go to students with financial need and a commitment to academic achievement. The first six recipients, (click here for full bios) who were announced at the Nov. 15 event and introduced to Winfrey on stage are:
• Nicholas Abourizk, a senior English and theatre arts major with a biology minor, from Methuen
• Coral Gonzalez Diana, a sophomore, nursing major with a psychology minor, from Chelsea
• Ashlie Grasa, a junior majoring in  chemical engineering, from Cincinnati, Ohio
• Daphne Shakira Naut, a double major in political science and philosophy with a double minor in German and Portuguese studies, from New York City
• Flore Stécie Norcéide, a sophomore electrical and computer engineering major from Haiti
• Jaime Waldron, a sophomore with a double major in criminal justice and business administration, with an accounting concentration,  from Haverhill
The event was presented by Liberty Mutual, Suffolk Construction and the Marty Meehan Educational Foundation and supported by dozens of other sponsors.
Prior UMass Lowell Chancellor’s Speaker Series programs featured author Stephen King in 2012 and actress Meryl Streep in 2014 and raised hundreds of thousands of dollars for student scholarships.

UMass Lowell is a national research university located on a high-energy campus in the heart of a global community. The university offers its more than 18,000 students bachelor’s, master’s and doctoral degrees in business, education, engineering, fine arts, health, humanities, sciences and social sciences. UMass Lowell delivers high-quality educational programs, vigorous hands-on learning and personal attention from leading faculty and staff, all of which prepare graduates to be leaders in their communities and around the globe.(News Provided by University of Massachusetts Lowell – Nov 16, 2018)

UMass Lowell plays a very important role in this mill city with a large Portuguese presence.In 2013 the Saab Center for Portuguese Studies was founded with a generous gift from the Saab Family Foundation.

Sponsors of the event, Mark and Elisia Saab, are two incredible supporters of education and UMass Lowell. The Saab family hosted thirty of their friends at the event who truly enjoyed an amazing and inspirational evening listening to Oprah Winfrey, one of the country’s most influential women.

Elisia Saab, with roots in the Azores, was recently recognized by the Portuguese President, Marcelo Rebelo de Sousa, for her generosity and support of institutions that care for the elderly and the neediest, and also for promoting the Portuguese language and culture.

The Saab Center for Portuguese Studies promotes the multidisciplinary study of the language, literature, and culture of the vast and varied Portuguese speaking world comprised of over 250 million people in eight countries on four continents and its diaspora.

The center features regular events showcasing prominent Portuguese figures in the areas of arts, literature, politics, as well as the presence of the Portuguese community in the city.

An example is an upcoming visit by Joaquim de Almeida a well known Portuguese actor who has appeared in over 100 films and television series, including Clear and Present Danger, Desperado, The Gilded Cage, and 24.