Trending
You are at:Home»Featured»“O Menino mija?” is a Common Question in the Azores During the Christmas Season

“O Menino mija?” is a Common Question in the Azores During the Christmas Season

A recent visit to the Cabral family home during the Christmas Season was a wonderful treat.

When Germano Cabral came to the door he was wearing a festive holiday jacket with Santa Claus printed all over it.

Underneath the jacket, he wore a sweatshirt that said: “As long as I have wine the holidays will be fine”. 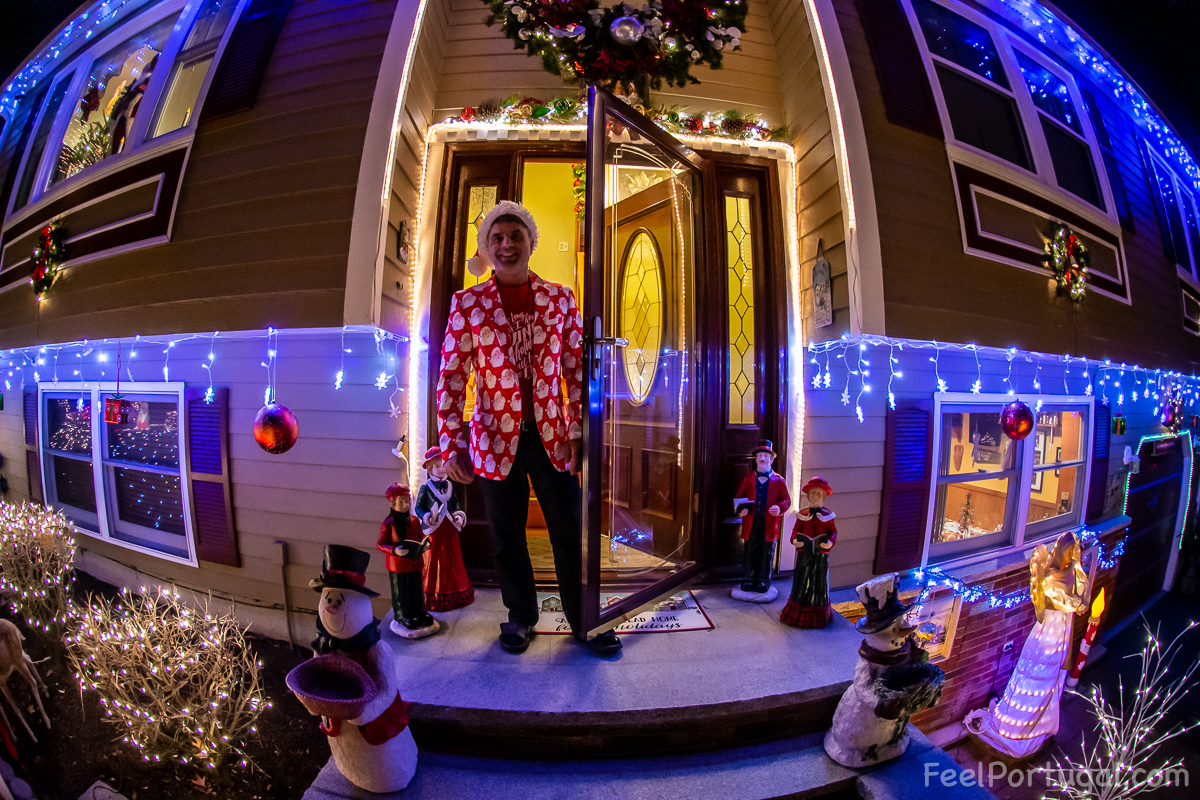 As soon as he opened the door my first question was “O Menino mija?”. He smiled and promptly said “yes!”, and asked me to come in. He introduced me to his wife, Filomena, who was in the living room making some final adjustments to a miniature Christmas village.

The season celebrates the period from the birth of Jesus to the visit of the Three Wise Men/kings.

During this time small groups of friends take to the streets and walk from house to house, oftentimes singing, and knock on doors of friends and family members.

When the visitors are greeted at the door they ask “O Menino mija?” and are treated, by the owner of the house,  to traditional liqueurs, dried figs, and pastries. After exchanging holiday greetings they continue to visit other friends and relatives throughout the evening. This tradition started in the Azorean islands sometime around the mid-eighteenth century. 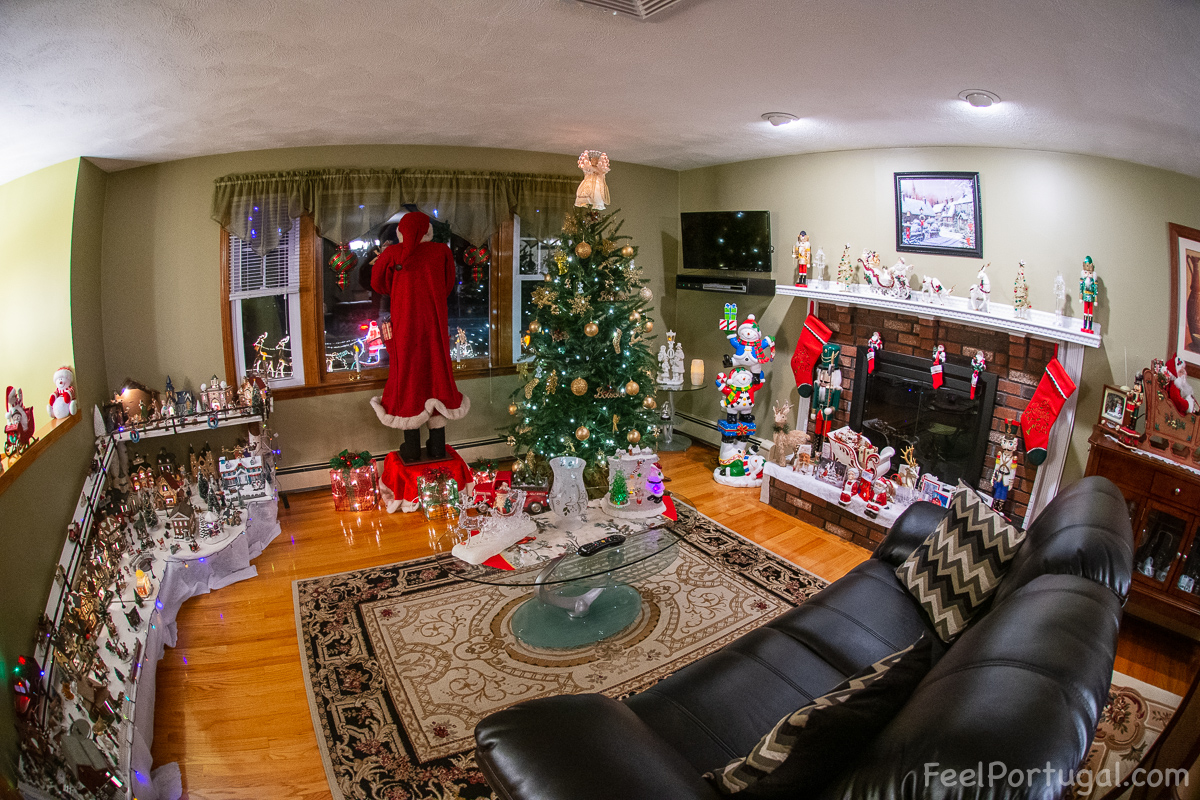 Filomena and Germano are both from Fajã de Cima, a small village in Sao Miguel, Azores.

Filomena was 3 years old when she and her parents came to the US. Filomena’s father, Manuel da Costa Sebastião, was a gravedigger at Cemitério da Fajã de Cima. He was also a storyteller and performed comedy. He came to the US in 1968 and worked for New England Casket.

When Filomena returned to the Azores on vacation in July 1985 she met Germano. Soon after, the two got married at the Nossa Senhora de Oliveira Church, in Fajã de Cima, and came to the US.

They settled in East Cambridge, MA and lived in an apartment building for 13 years before moving to Somerville.

While living in Cambridge and Somerville the Cabral family decorated their home and yard, but “not the way we do it in Woburn” said Germano.

In 2000 they moved to Woburn where they purchased their first home.

“Christmas is our favorite holiday,” said Filomena. She went on to say “during my childhood, Christmas was difficult because there was no money”. She then explained how her father worked two jobs, just for the family to make ends meet. During the day he worked at the New England Casket Company and at night he worked for a janitorial company. Her mom was a homemaker who took care of her and her 4 other siblings. 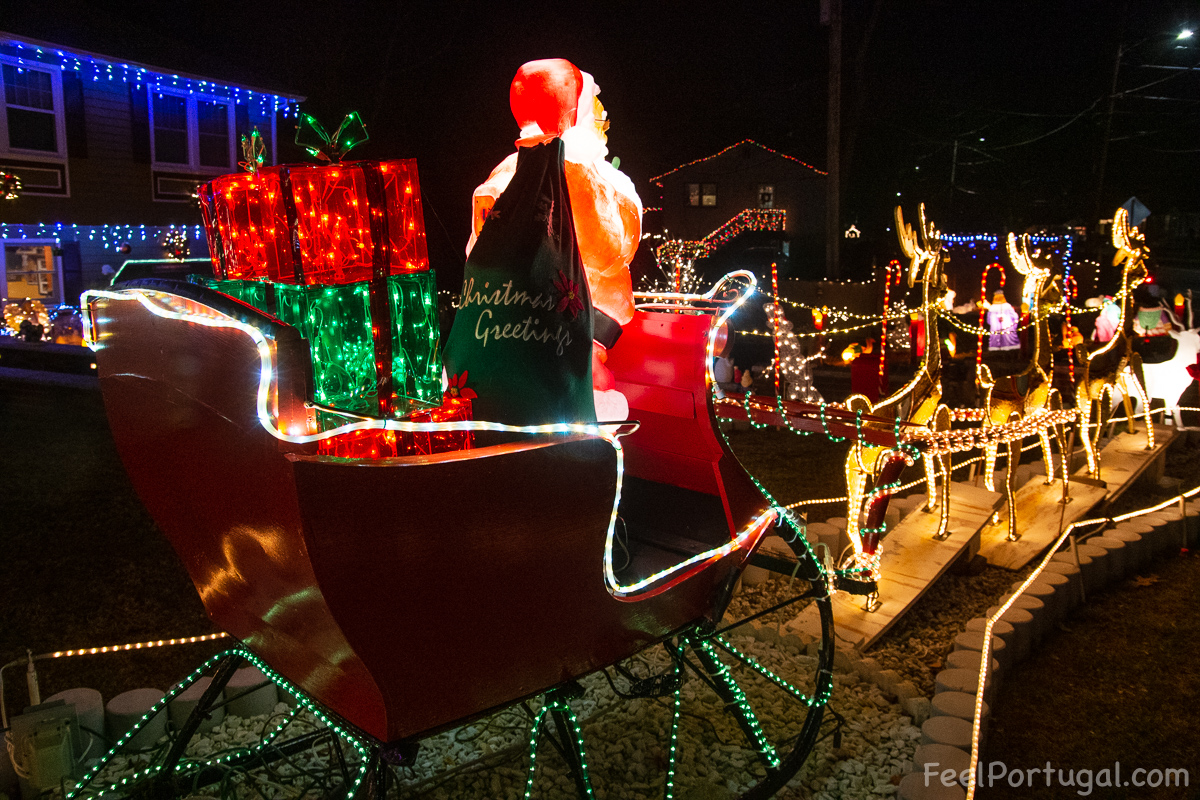 Santa and his reindeer

As a child, Filomena remembers that her parents, who struggled financially, relied on  Globe Santa to brighten the holidays for her and her siblings.  She has fond memories of Globe Santa coming to Saint Anthony’s Church in Cambridge to deliver presents to her and other neighborhood children.

The Christmas spirit of the Cabral family, and the seasonal decorations they lovingly place on their front lawn brighten the holidays for many children, young and old.

“We enjoy decorating the house and yard for all the holidays, but Christmas is our favorite time of year,” said Filomena.

The holiday decorations were not the only reason that prompted me to visit the Cabral’s. Another reason was something Germano wrote on his Facebook page. He said “O Menino mija”. The translation for this short phrase is “Does the Little Boy Pee?”. And needs some explaining.

Their first Christmas in Woburn “was also a first for the neighborhood” said Germano. He went on to say “we were the first family in the neighborhood to go all out decorating the yard.” Filomena then added “people would stop in front of the house to take photos of the yard’.

In the last 18 years, there was only one year that the Christmas lights didn’t go on, with the exception of Christmas Eve. It was during the 2007 Christmas season when Germano’s father, Virgilio Cabral, passed away.

The neighbors would come by and ask the Cabral family why the Christmas decorations in the yard were not on. 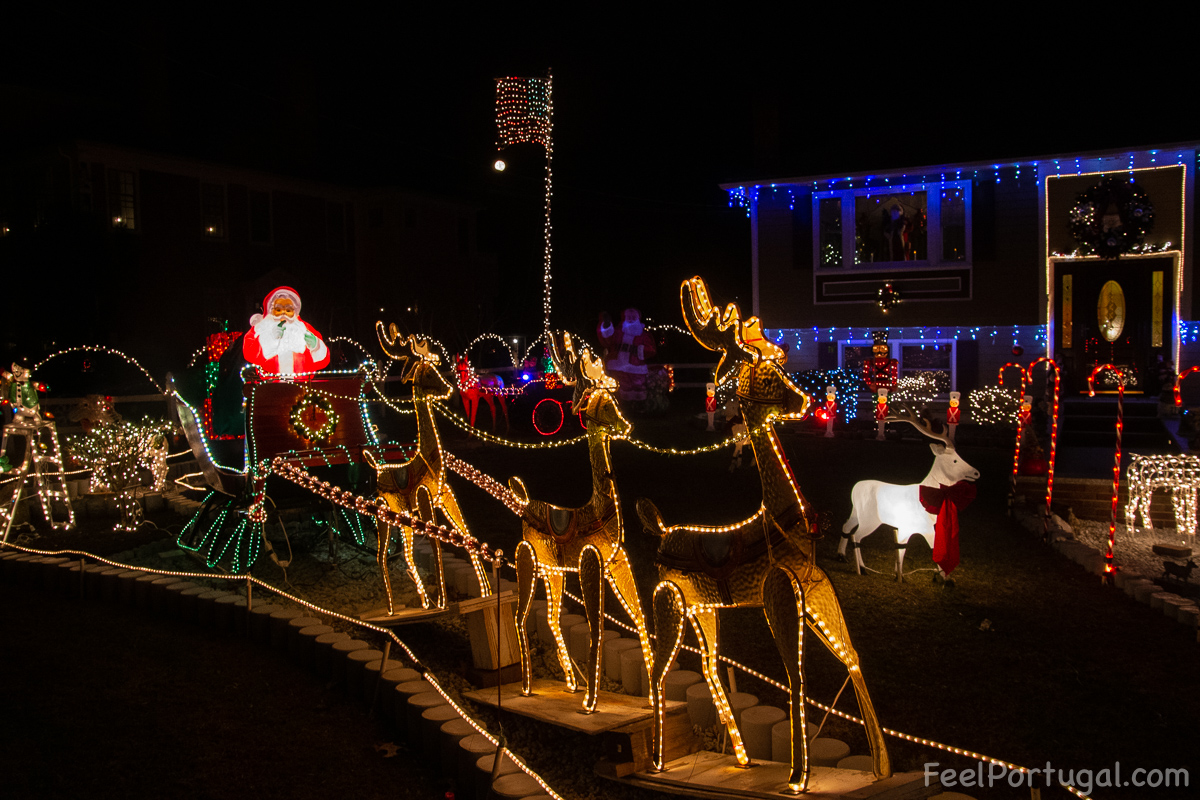 Germano remembers Christmas Eve back in Sao Miguel. Dinner would consist of freshly killed chicken that his father would get from the yard, a soup made with cornflower and beans, and for dessert, Bolo de pão de trigo (wheat bread) with figos passados (dried figs) known in the US as bread pudding. The beverage of choice was wine.

Let’s keep the tradition alive. The next time you visit an Azorean friend or family member during this Christmas season ask “O Menino mija?” and you will Feel Portugal in the US.