Trending
You are at:Home»Arts & Culture»Events»Marta Pereira da Costa Coming to Narrows Center For The Arts in Fall River

Portuguese guitarist Marta Pereira da Costa will perform at the Narrows Center for the Arts in Fall River, Massachusetts on Saturday, March 16, 2019, at 8:00 pm.

This is Marta’s first US debut as a headliner. Marta toured the US in 2013 and again in 2014 with Rodrigo Costa Félix and Pedro Pinhal, in visits sponsored by Portuguese/American Cultural Exchange (PACE).

For this tour, she is playing concerts in CA, DC, TX, NY, and MA. The concerts are an opportunity to hear a broad range of Portuguese and other music, played by one of the highest profile musicians working in Portugal today.

During her North American tour in March 2019 Marta will make her debut at New York’s Lincoln Center, Washington D.C.’s Kennedy Center, and Austin, TX’s SXSW Festival. The tour features her quintet, António Pinto on classical guitar, Miguel Amado on contrabass, Alexandre Diniz on piano, and André Sousa Machado on percussion. Together they’ll perform both Marta’s original repertoire from her album, as well as their own takes on Portuguese classics from the artists that have influenced her, including Variações Carlos Paredes and Mário Pacheco.

Don’t miss this rare opportunity for American audiences to catch one of Europe’s rising musical stars.

Marta Pereira da Costa is the world’s first and only female professional Portuguese Guitar player of fado music, the soulful sound of Portugal; recently acknowledged by UNESCO as part of the World’s Intangible Cultural Heritage.

Marta started playing the piano at the age of 4, learned the classical guitar at the age of 8, and at 18 began to study the Portuguese Guitar under the tutelage of Carlos Gonçalves, one of the most influential modern Portuguese guitar players and accompanists of legendary fado singer Amália Rodrigues. 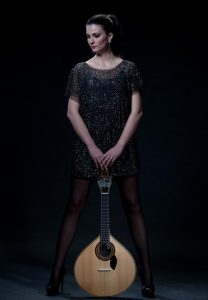 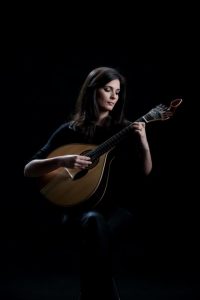 She has collaborated and performed with some of the brightest stars of contemporary Portuguese music, including Camané, Carlos do Carmo, and Mariza. Marta was also a member of fado great Mário Pacheco’s group, and recorded on his album Clube de Fado – a música e a guitarra, which Songlines Magazine named The Best of World Music in 2005.

In 2008, she was invited by Spanish composer and producer Jaime Roldán, to record the song “Pasa” on the album Unidad de Canciones Intensivas. In 2012 Marta recorded the Portuguese Guitar for Rodrigo’s “ Fados de Amor”, the first album in the history of Fado where the Portuguese Guitar is solely played by a woman, awarded Best Fado Album of 2012 by the prestigious Amália Rodrigues Foundation.

2012 was also the year that Marta decided to abandon her work as a civil engineer in order to pursue her professional music career. She made her debut as a headlining performer in Toronto at Hugh’s Room, that year, and later in Lisbon as part of the city’s “Festas de Lisboa” festival, then performed in Madrid’s Teatros del Canal for the “II Fado Festival”, and at TEDx Boavista, and at Lisbon’s prestigious CCB venue.

In 2013 Marta was invited to be part of the “Talented People” program by the Spanish brand Cortefiel, and together with Rodrigo Costa Felix they staged a sold out concert at Lisbon’s Tivoli Theatre. In April she was one of the guest stars at Radio Alfa’s Fado Gala in Paris. In June, also with Rodrigo, she toured Brazil with stops in São Paulo and Rio de Janeiro. Later that year the two made a short, 10-stop tour of the United States, performing in such rooms as Johnny D’s in Boston and in Drom in New York City. They also gave several workshops on fado music at Universities and High Schools along the way.

In 2014 Marta and Rodrigo returned to the U.S., with a special stop in Kansas City, where they paid homage to that city’s storied jazz heritage. Back home in Portugal, Marta sold out several major venues, such as Auditório da Boa Nova in Estoril, Figueira da Foz Casino, and Casa da Música in Oporto. She also performed in Switzerland, Israel (at Tel Aviv’s Felicja Blumental Music Festival). and Romania’s Bucharest Radio Room. Marta also collaborated on the “Brincar aos Fados” (“Playing with fados”) project, recording all the Portuguese Guitar compositions, and giving her an incentive to work on her own solo recording career. Her debut single “Terra” was selected as the soundtrack for a film produced by the Portuguese Chamber of Commerce. All her hard work was that year paid off when The Amália Rodrigues Foundation honored Marta with their prestigious “Instrumentalist Award 2014”.

Marta released her self-titled debut album, Marta Pereira da Costa, on Warner Music in May 2016, to instant critical and popular acclaim. The album’s 13 tracks mixed original compositions with her interpretations of contemporary Portuguese composers; instrumentals with guest vocals for Dulce Pontes and Rui Veloso and more: fado tradition with jazz improvisation; and instruments and influences from around the world. One of Marta’s key collaborators was GRAMMY Award-winning Cameroonian bassist Richard Bona, who helped bring Lisbon’s simmering Afro-Atlantic vibes to the fore on “Encontro”.

In 2016 Marta joined the band of Portuguese singer Dulce Pontes, traveling all over the world and playing some of the world’s most storied rooms: Barcelona’s Palau de la Musica, Madrid’s Teatro Nuevo Apolo, Venice’s Teatro La Fenice, etc — even playing for Pierre Cardin in Lacoste. Marta also continued to tour with her own band, filling Portuguese auditoriums like Lethes Theatre in Faro and Carlos Paredes Auditorium in Lisbon, and make appearances at Guitar Festivals in Almeirim and Oeiras, where Marta invited sax jazz player Ricardo Toscano to join her.

In the same year, Marta was invited to participate in an episode of the blockbuster French television series Une Famille Formidable by director Joel Santoni. She performed several of her compositions as well as traditional pieces. Marta also worked on the series’ soundtrack with Xavier Berthelot, for which she recorded Portuguese guitar parts.

In 2017 Marta produced her first major concert event in Lisbon, gathering all the musicians that recorded on her album onstage for the first time, at a sold out BBVA Tivoli Theatre in Lisbon, It was the confirmation of Marta Pereira da Costa as a praised name in Fado and also in the Portuguese musical scene.

Marta was also invited to play various public and private events in 2017, including performances at Casa de Mateus, Misericórdia’s Church in Tavira, and even a private reception for the President of Colombia at Lisbon’s Ajuda Palace.

2018 was a big year for Marta, with over 30 dates booked. She played two sold-out shows at the Real Teatro Santa Cecilia in Palermo, Sicily as part of the city’s Brass in Jazz Festival, performed at the BBK room in Bilbao, Spain, then at the Waterloo Jazz Festival in Ontario, Canada, and touched down in Morocco with appearances at Marrakech’s Bahia Place and Rabat’s Festival des Cordes Pincés.

Marta delighted audiences at Spain’s prestigious Cordoba Guitar Festival, where she shared the bill with such guitar heroes as Pat Metheny and Vicente Amigo, garnering praise in the Spanish press as an exemplar of modern Portuguese guitar music.

At home in Portugal, Marta also received glowing reviews for her performances at Diogo Bernardes Theatre in Ponte de Lima, Fábrica Braço de Prata, and the Lisbon Living Room Sessions. She continued to make waves with her debut at Lisbon’s Bragança Theatre, her first appearance at a Portuguese rock festival, NOS ALIVE, a stunning live set at the MIMO Festival in Amarante, and a special concert at the Monsaraz Biennial Open Museum at the city’s Castle.

Best of all, Marta made a triumphant return to the Santa Casa Alfama Fado Festival, where she had made her solo concert debut in Lisbon in 2012. Six years later, a huge crowd turned out to support her with rapturous applause.

2018 presented other opportunities and honors as well. Marta received a rare invitation to perform with a traditional men’s fado choir from Coimbra — where she was the only woman featured on stage. She was also invited to the 14th edition of the L`Oreal Medal of Honor for Women in Science event, in Lisbon. She performed at the 6th edition of Portugal’s Prémios Sophia cinema awards, playing “Minha Alma” live on national television, and was invited to perform a song for the Portuguese television documentary series Três Mulheres (Three Women). RTP also chose Marta’s single “TERRA” for a promotional spot during the 2018 FIFA World Cup in Russia.

In 2019 Marta continues to reach out to new audiences, with two confirmed dates in Cape Verde in June, and a North American tour in March — where she will make her debut at New York’s Lincoln Center, Washington D.C.’s Kennedy Center, and Austin, TX’s SXSW Festival. The tour features her quintet, António Pinto on classical guitar, Miguel Amado on contrabass, Alexandre Diniz on piano, and André Sousa Machado on percussion. Together they’ll perform both Marta’s original repertoire from her album, as well as their own takes on Portuguese classics from the artists that have influenced her, including Variações Carlos Paredes and Mário Pacheco.

Don’t miss this rare opportunity for American audiences to catch one of Europe’s rising musical stars.

For more information and to purchase tickets for this event visit www.narrowscenter.org