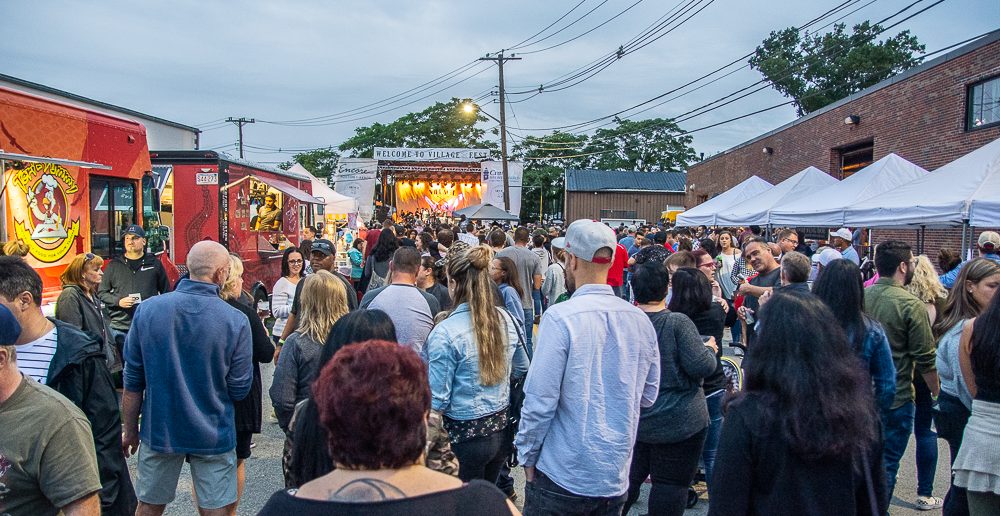 What a day! Everett’s 5th Annual Village Fest, a free city-wide family event for all ages at the end of the summer season, took place on Saturday, September 14th.

The celebration drew a multitude of people, very likely the largest ever, and it’s part of the city of Everett’s plan to revitalize this former warehouse section of the city where many breweries and other businesses already opened.

According to the city’s website, Mayor Carlo DeMaria noted that this was the 5th year of Village Fest, as the City moved the festival five years ago. Previously, it was known as City Fest and was in Everett Square.

The event took place in Everett’s “Village Business District” where a section of Santilli Highway was closed to automobile traffic.

As we walked around we could see many of Boston’s best food trucks serving an array of food and beverages to please everyone’s taste buds.

A common sight throughout the festival was parents walking with their children, and owners with their well behaved four-legged friends on leashes.

With so many attractions children also had plenty do for fun. There was a climbing wall that was very popular as well as the usual ice cream treats.

In addition to food, there were tents serving locally crafted beer and spirits from the Craft Brewers Guild, Night Shift Brewing, Bone Up Brewery, Short Path Distillery, and others.

For those who preferred to be seated indoors the Village Bar & Grill a neighborhood restaurant and bar was the place to visit.

FeelPortugal ran into João Lopes, the owner of the Village Bar & Grill, who was running around trying to make sure all was going smooth at the restaurant. He had a chance to talk and told us “T is a great fest. Even though my wife and I will be exhausted at the end of the day we look forward to this event”.

João, who recently celebrated his restaurant’s second year anniversary sat down with us for a short time and told us: “I was born in Portugal and my wife in Brazil” he then went on to say: “we love the diversity of this neighborhood and we do our best to please all our customers”.

Village Bar & Grill was well represented in the fest with a huge “beer garden tent” serving a wide variety of craft beers to the crowd.

Inside, the restaurant was packed with people eating and drinking while others were sitting at the bar watching sports events on several HD screens.  The Village often has the Patriots, Red Sox, Bruins, Celtics, and Revolution. Other times they show European, and South American soccer games.

The outdoor patio was also full to capacity with people listening to local bands playing in a nearby stage set up in the parking lot.

João, originally from Cascais in Portugal, a country that he visits regularly, told us:  “This feast reminds me so much of the feasts in my home town… it’s great to see everyone enjoying great music, food and beer, and being proud to participate in their city’s event.”

Further down the street, the main stage had an amazing lineup of top groups, including two internationally acclaimed headline bands “The Wailers” and “Fastball”.

“FASTBALL” a very popular band from the early 2000s took to the stage and sang some of their big hits, “The Way”, “Out of my Head”, “Fire Escape”

Then came, “THE WAILERS”, Bob Marley’s legendary reggae ban. They had performed at the very first Village Fest in Everett a few years ago. They came back to Everett this year and were the last band to play on the main stage.  The crowd was delighted to see them back.

The event was partly sponsored by Encore Boston Harbor, The Craft Brewers Guild, and Suffolk Construction. For those who came down to the  5th Annual Village Fest this past Saturday, the event will be a wonderful memory they won’t soon forget. Some would say: This was the best one!

Several talented groups performed on the main stage, including:

The event featured a “B” stage, placed in the parking lot of Bone Up Brewery on Norman Street, that featured the following:

In Between Sets:
Problemattik
DJ CJ