Trending
You are at:Home»Events»Retalhos da Minha Infância: A Memoir of Coming to America by Manuel Fernando Neto with Special participation of Fadista Catarina Avelar 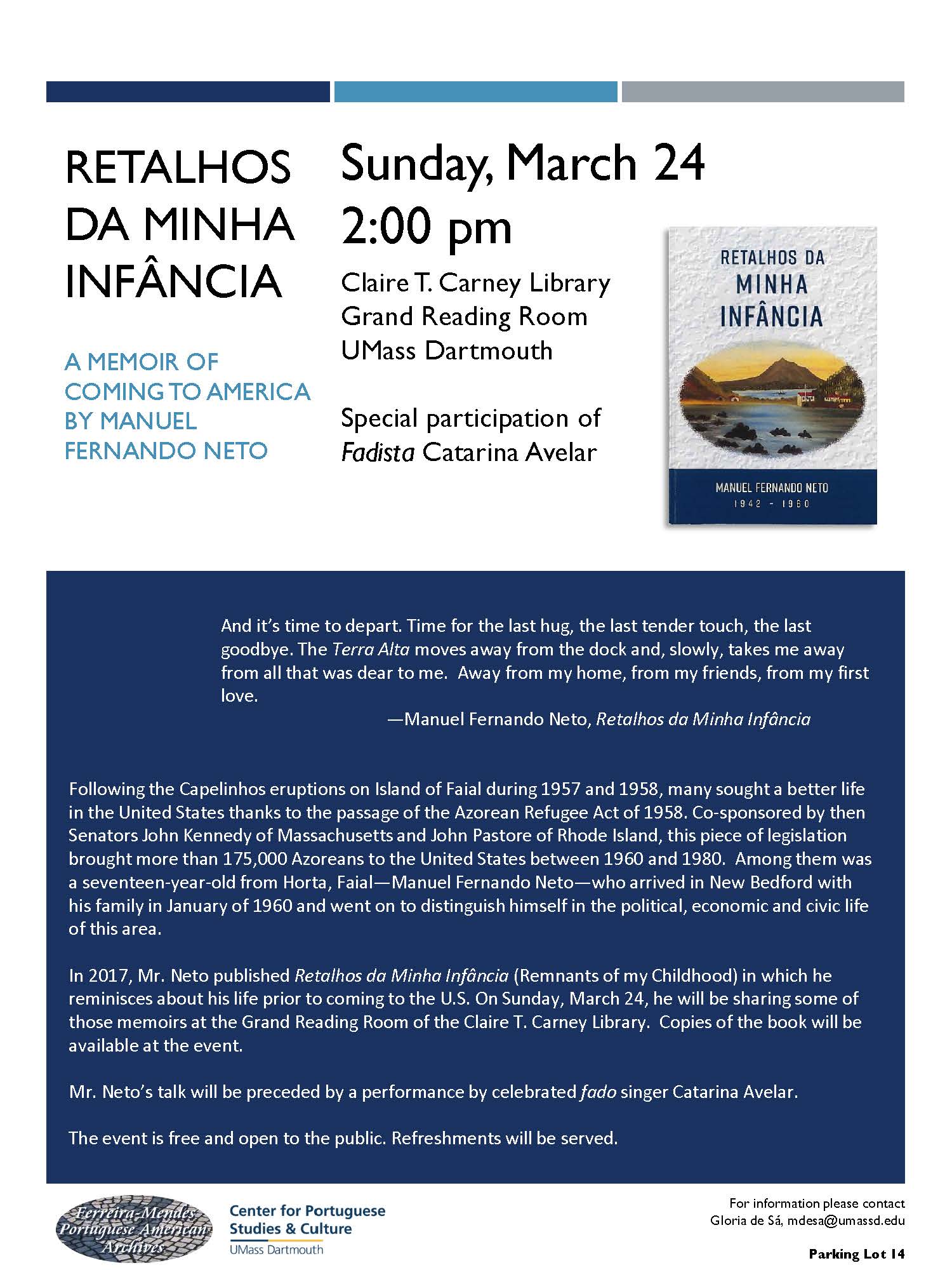 The Ferreira-Mendes Portuguese American Archives in collaborations with the Center for Portuguese Studies and Culture at the University of Massachusetts Dartmouth announce a book launching and presentation by Mr. Manuel Fernando Neto about his childhood in Faial and his coming to the U.S. as a Capelinhos refugee.

The event, which is free and open to the public, will take place at 2:00 PM on Sunday, March 24, in the Grand Reading Room of the Claire T. Carney Library (Parking Lot 14), and will include refreshments and a performance by local fadista Catarina Avelar.

The last and largest wave of Portuguese immigration to the U.S. began with the passage of the Azorean Refugee Act of 1958. Co-sponsored by then Senators John Kennedy of Massachusetts and John Pastore of Rhode Island, the law authorized non-quota visas for Portuguese citizens who had been displaced by the eruptions of the Capelinhos Volcano on the Azorean island of Faial during 1957. According to a 2008 House of Representatives resolution celebrating the 50th anniversary of the occurrence, that natural disaster led to a wave of emigration that brought more than 175,000 Azoreans to the United States between 1960 and 1980.  One of those was a seventeen-year-old from Horta, Faial—Manuel Fernando Neto, who arrived in New Bedford with his family in January of 1960. Eleven years later, in 1971, he was elected to New Bedford’s City Council, becoming its president in 1977.  In the meantime, he had been instrumental in founding or co-founding most of the organizations and programs that sprang up in the 1970s to meet the needs of the recently-arrived Portuguese immigrants in this area, including the movement for bilingual education in Massachusetts, and the Immigrants Assistance Center, Casa da Saudade Library, and the Luso-American Soccer Association in New Bedford.  In the 1980s, as the needs of the Portuguese community changed, he was in the vanguard of the efforts that created organizations such as the Portuguese-American Congress of New England, the Portuguese-Businessman Association of Fall River, and the Endowed Chair in Portuguese Studies at UMass Dartmouth. 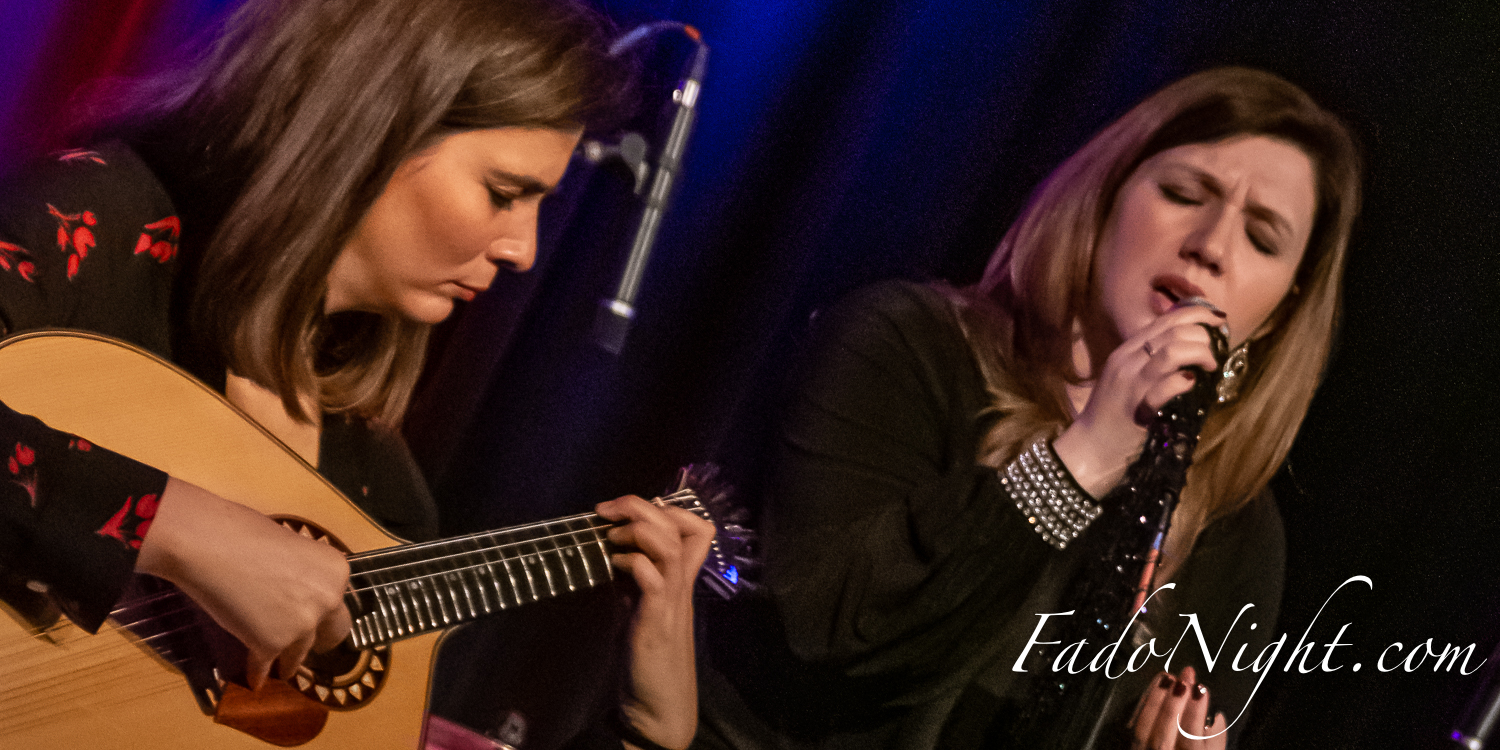 Mr. Neto’s talk will be preceded by a performance by celebrated fado singer Catarina Avelar

Since 1973, Manuel Fernando Neto has run Neto Insurance, a successful business enterprise with offices in New Bedford and Fall River, and between 1987 and 1994 he also ventured into Portuguese language media as the owner and operator of WRCP 1290AM – Radio Clube Português, in Providence. His business success has allowed him to support numerous local and international organizations and causes, but his generosity has not been limited to financial help. He has also put his time and expertise to the service of dozens of organizations, such as Volunteers of America, The Heart Fund, Club União Faialense, and the Fundação Faialense. Mr. Neto’s extensive charitable and civic contributions, have been recognized by a large number of groups, organizations and institutions, including UMD’s chapter of the Portuguese Collegiate Honor Society, the Massachusetts House of Representatives, and the government of Portugal whose president Mário Soares decorated him with the Comenda da Ordem do Mérito in 1987.

Retalhos da Minha Infância, Mr. Neto’s memoir about his childhood in Faial, will be available at the event. Donations will go to organizations helping immigrants in the area.