Trending
You are at:Home»Events»2018 – Feast of the Holy Trinity in Lowell 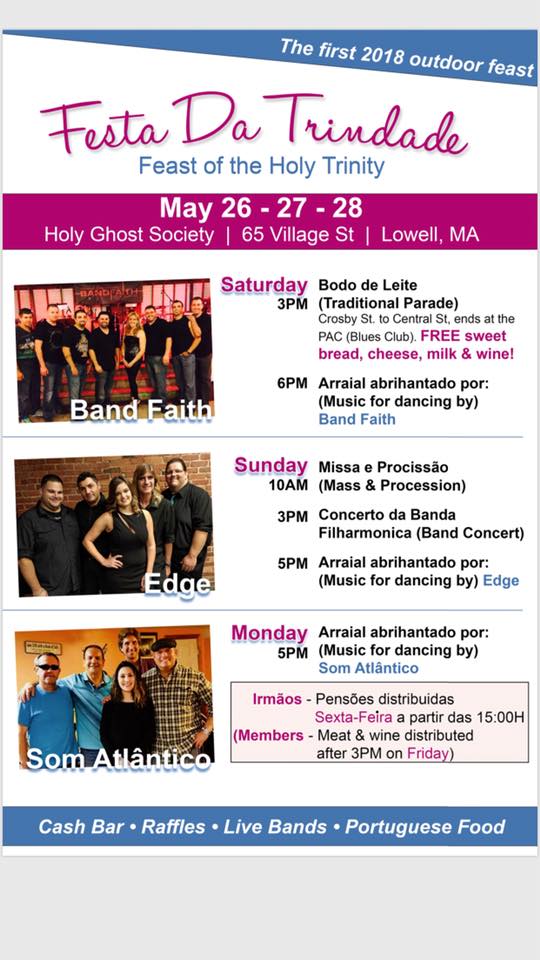 One of the first outdoor feasts of 2018, is the feast of the Holy Trinity in Lowell. Usually, this feast takes place on the sixth Sunday after Easter and was founded in 1980 by a group of a group of Portuguese parishioners. It’s organized by Holy Trinity Brotherhood in the space provided by Lowell Holy Spirit Society. The fest involves the entire Portuguese Community in Lowell and from neighboring towns.

This year’s festivities will be on May 26, 27, and 28. The feast highlights will be the traditional parade – Bodo de Leite on Saturday afternoon (3 pm) with the starting point at Crosby Street to Central Street and ending at Portuguese American Civic (PAC – Blues Club). Where at the end free sweet bread, cheese, milk, and wine will be served. At night will be music for dancing by Band Faith. On Sunday the festivities will continue with Mass followed by the Procession at 10 am. At 3 pm it will be a Philarmonic Band concert by the Trindade Philarmonic Band of Lowell, and at night will be music for dancing by the musical group Edge. The festivities will end on Monday the 28th with the musical group Som Atlantico.

The brotherhood was found by a group of Portuguese parishioners, after the discovery of an old flag and a crown that had the inscriptions of the Trinity, in an outbuilding next to the Church of St. Anthony of Lowell, a church of the Holy Trinity. The current number of members is approximately 320, most of them are members in relation to the Azores. The majority of the members of the brotherhood come from Terceira Island, but there are also members from Graciosa, São Jorge, and Faial. The Brotherhood organize many fundraising activities during the year, with the most important one, the dinner for the prince and princess of the Feast, six weeks before the feast of the Trinity.

Location and Installations – At the Holy Spirit Lowell Society.

Date of the party – It’s on the six Sunday after Easter.

Preferential model for the organization of the party – The Festa is ritually organized by reference to Terceira Island.