The International Portuguese Music Awards has outdone itself once again. With the red carpet rolled out and a star-studded performer lineup, the sixth edition of this annual event took place on April 21st at the Zeiterion Theater in New Bedford, Massachusetts. The organizers continue to produce a world-class event that has gotten “bigger and better” each year.

Since 2013, IPMA has strived to recognize outstanding work in the music industry by artists of Portuguese ancestry. Both amateur and professional musicians can submit their songs for one of thirteen award categories.

This year had a total of 35 nominees hailing from eight countries – Brazil, Canada, Cape Verde, Luxembourg, Netherlands, Nigeria, Portugal, and the United States.

Awards were handed out to the following artists:

“Fly Higher” by The Code (Portugal)

The People’s Choice award was voted on by the general public via the IPMA website. Votes from 73 countries were collected.

In addition to the above-mentioned categories, this special recognition is granted to one artist/band each year. Past recipients of this award include Paulo Gonzo and Daniela Mercury.

This year’s Lifetime Achievement Award recipients have a career that has spanned almost forty years. Xutos & Pontapés are widely considered to be Portugal’s best rock band, and their songs have become some of the biggest anthems in Portugal’s rock history. They continue to be an inspiration to Portuguese rock bands. 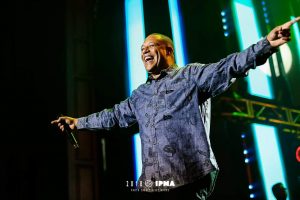 The award show festivities included a performance by Miguel Angelo from Portugal, who was the lead singer of the pop-rock band Delfins for twenty-five years until he went solo in 2012. The legendary hip-hop artist Carlão and Luso-American singer David DeMelo made their marks in IPMA history and 2017 IPMA award winners Manhattan Camerata also graced the stage.

There was a surprise performance by Rui Bandeira, who in 1999 represented Portugal in the Eurovision Song Contest.

Shortly following the awards ceremony, a few of the award winners were contacted and happily agreed to answer a few questions about their experiences.

In 2017 you were the International Portuguese Music Awards ‘New Talent’ winner. Can you tell us about some of the things you’ve been up to since then?

Since winning the New Talent award in 2017 at the IPMAs, so many doors have opened. I’ve had the opportunity to travel to Portugal and be interviewed by RTP International’s Music Box TV segment, I went to London to celebrate the MTV Cover of the Month wins at the Europe Music Awards with all the other contestants and best of all, I have been accepted into one of the most welcoming and supportive communities I have ever been a part of. I am currently working on recording my new single that will be released this fall!

When recording your acceptance speech, did you already know that “Games” won the ‘Music Video of the Year’ category or did you have to wait for the public announcement? Do you remember what you were doing when you learned about the news?

When filming our acceptance speech, we did not know that we had won yet. We were staying positive. However, we thought that it was a mandatory task for all nominees that were not able to attend the award show. We didn’t find out until it was publicly announced.

I was singing a wedding ceremony at the time it was announced, and I remember seeing my guitarist texting me over and over. I just ignored his texts thinking nothing of it, but when I finished singing and opened the messages, I was thrilled to find out that our team had won!

What was it like to make a music video for one of your original songs for the first time? Now that “Games” is an award winner, do you look at the video differently?

Making my first music video was a dream. I had an amazing team in Pixel Point Media and my bandmates, and they made my vision come to life. Now that Games has won Best Music Video of the Year for 2018, I do see it differently. It means a lot to have our creation be internationally recognized and gives me the fire to keep working hard to produce more music for all my supporters!

I remember being interviewed last year after my performance for Best New Artist and stating that “this was only the beginning” and it’s been wonderful to see that statement come true. I can’t wait to see where this journey will go 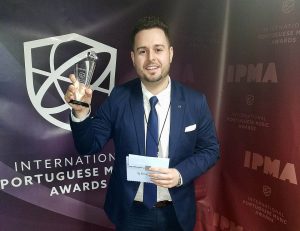 Your song “On Your Love” was awarded in the International Portuguese Music Awards ‘Dance’ category in 2015, and you’ve come out on top again in 2018 with “Elemental”. How does it feel to now have two accolades from the IPMA?

First and foremost I feel extremely fortunate. The electronic dance music space is one that is constantly growing and seeing new artists emerge and develop their sounds. That being said, I feel so thankful that I was able to be recognized for my work again in this genre.

“Elemental” had a feature from Lyon Hart. Is there anything you want to share about the collaboration? How did you end up working together?

The collab with Lyon couldn’t have gone smoother. Originally I had heard him on a single by Elephante called “Shake The Earth” and instantly fell in love with his vocal performance. I reached out shortly after with the then rough draft of “Elemental” and had an idea of what sort of vibe I wanted to shoot for. Once I painted the vision for Lyon, he came back with a great foundation of lyrics and melodies that would eventually transform into the full top line. It was honestly one of the most organic feelings, and cohesive collaborations I feel I have done on a record.

Are there any musicians that have been influential to you over the years?

Certainly, in the electronic space, there are several. Zedd is one that I’m constantly in awe of. His songwriting ability and melodies dating back to “Spectrum” and “Clarity” are really the benchmarks for me as far as the songwriting and production I strive for. Galantis is definitely another, as well as Flume. Also, countless rock acts such as the Foo Fighters, Queens Of The Stone Age, Bullet For My Valentine and so many more. I was originally producing and writing a lot of rock music before I stepped into the electronic space! 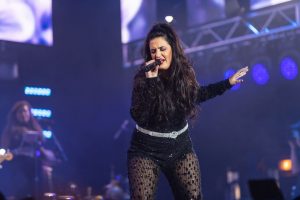 What was it like to perform live at the 2018 IPMA knowing that it will be televised worldwide? How was this different from your other performances?

Performing Live at the 2018 IPMA was one of the most rewarding experiences of my life. It was the first time I had ever been asked to perform at an award show. It was an indescribable adrenaline rush, and I will never forget the feeling.

Other than being the ‘New Talent’ winner, were there any other special IPMA moments that will stand out in your memories?

I had the opportunity to make so many new friendships that will last a lifetime at the IPMA. I was impressed with the professionalism of the crew, hosts, artists, and overall show! The IPMA crew was very hospitable throughout my entire stay in New Bedford. Aaron Lewis was an incredible host!

As you continue to move forward in your music career, what is one thing you want people to know about you as an artist?

I want people to know that my music is a reflection of who I am, and what I have gone through in my life. I hope to be a positive light in the world because God has blessed me with the ability to touch people. I never take that for granted.